Ovo Streams
Home Other Sports Sportsmail’s new columnist Laura Muir is fit and firing ahead of the... 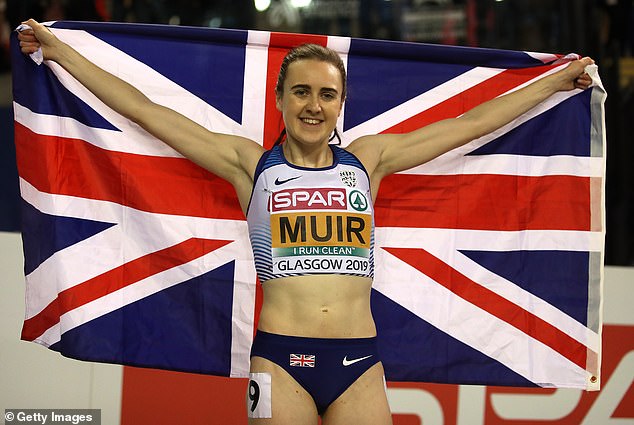 The memory of that Brazilian evening still crosses Laura Muir’s mind. She finds herself going back to one moment, to the decision to stay or go. Gold or bust. She chose gold; her legs eventually went bust.

It was gutsy, that call, and for a time it looked brilliant as she ditched the safe pace of the pack and set off after Faith Kipyegon and Genzebe Dibaba. With 300m to go in that Olympic 1500m final she was right there with them, well clear of fourth.

But then those legs got heavier, the head bobbed, and one by one the rest caught up. Third became fourth and fourth became fifth and when it was all done Kipyegon had gold and Muir was seventh.

Five years have passed since that race in Rio de Janeiro, and it sometimes seems incredible that her wait for a first global medal on an outdoor track is ongoing.

She has won five European titles in that time, to go with two Diamond League crowns and a pair of World Indoor podium finishes, but it’s not yet happened on the very biggest stages for an athlete of great quality.

She was fifth as the bright young thing at the Beijing worlds in 2015, fourth by 0.07sec at their London equivalent in 2017 and fifth in Doha 2019 with a shredded calf — always close but not quite there.

So she does think about that final in 2016. About a decision to go for the biggest prize when a bronze would probably have been hers had she stayed with the pack and conserved her strength. Coulda, woulda, shoulda, all of those contortions, but Muir doesn’t tend to work that way.

‘It’s one of those races that I think about a lot and wonder if I would do anything differently,’ she tells Sportsmail, having signed up to write an exclusive column in these pages throughout her next summit attempt in Tokyo. 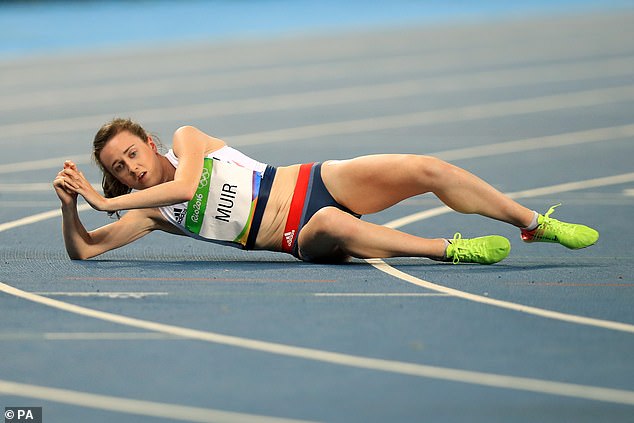 ‘I probably could have given myself a chance of winning one of the other colours, had I run it differently. But the gold would have gone and for me, at that time, that was a no.’

She has a stop and a think. Better to swing and miss than to not swing at all. Better to know than to wonder.

But still, it is there to be chewed over and deliberated by the rest of us, not least because Muir faces such a stiff task to get that medal when these belated Olympics finally get going. Indeed, across the whole of athletics, no field is so brutally stacked as the women’s 1500m.

‘Oh yes,’ she says. She can laugh about it, because she travels as a major contender. But while the data analysts Gracenote recently made Muir the favourite for gold, other measures encourage far more caution.

Specifically, the 27-year-old will race the combined forces of Kenya’s Kipyegon (2016 Olympic champion and 2019 world silver, with a 3:54.22 personal best), Sifan Hassan of the Netherlands (reigning world champion with a PB of 3:51.95) and Ethiopia’s Gudaf Tsegay (world bronze, who ran 3:53.09 for a world indoor record in February). 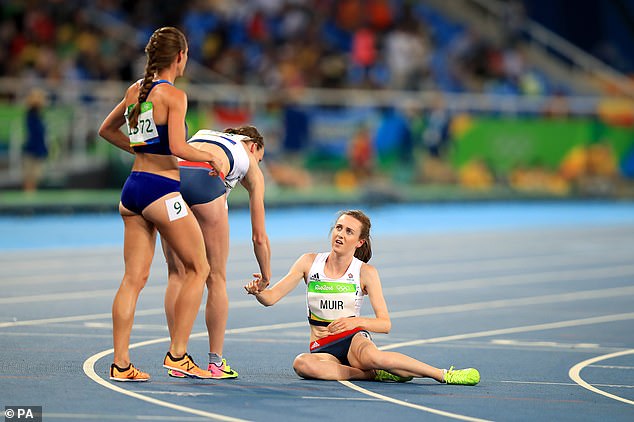 There’s also the unknown of how much remains in the tank for the 30-year-old world-record holder Genzebe Dibaba.

To put all that in context, Muir’s best time is the British record of 3:55.22, run 11 days after those Rio Olympics and in a race where she blitzed Kipyegon. That was before shoe technologies went berserk and scrambled what we know about numbers, so lower digits can be expected, but even then the Tokyo mission is considerable.

‘It is fantastic to be part of this, but obviously it also makes medals really hard to get,’ she says. ‘If you were to get a medal then it just makes that achievement bigger.

‘You’re running against the best there has ever been. I wouldn’t say it’s annoying to be in that kind of field but it definitely means you work harder.

It is illustrated in Muir’s case by what she paints as a mad dash to get out of Dubai in January, when her training camp was abruptly halted by the news that the British Government had added the emirate to their red list. She had just hours to get on a plane or else face quarantine on her return.

‘Everything just changed overnight so it was quite stressful,’ she says.

‘We were lucky that we saw it as it happened, so we were able to act quickly. But we’d literally just extended the amount of time we were going to stay out there by a week because the weather was bad at home in Scotland, then it suddenly becomes, “Er, how are we getting home?” 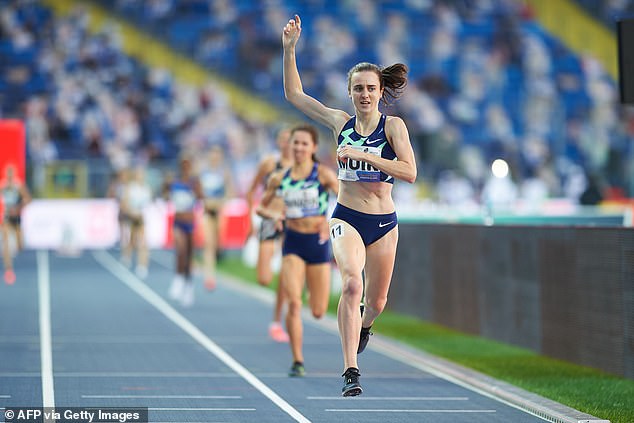 ‘You had to get tested ahead of travelling so Andy (Young, her coach) had us heading for the car and racing for this test centre. It got pretty interesting.

‘The whole of the past year has been so hard for everyone, and far more important things have been going on. But for athletes building up to something as massive as the Olympics, there’s just been so many unknowns.’

It is by twisted luck that Muir finds herself in the group of athletes inadvertently helped by the postponement of the Games. It is no secret that the second quickest time of her career — the 3:55.76 she ran in finishing fifth at the 2019 world championships final — was done on the back of a torn calf.

With the issue subsequently spreading to her achilles and then dragging into 2020, Muir admits she would have been well off full power for the original Tokyo date. ‘I had a difficult winter after the 2019 season,’ she says. ‘I wasn’t in a great place and I was trying to get somewhere with my body that I was happy with. 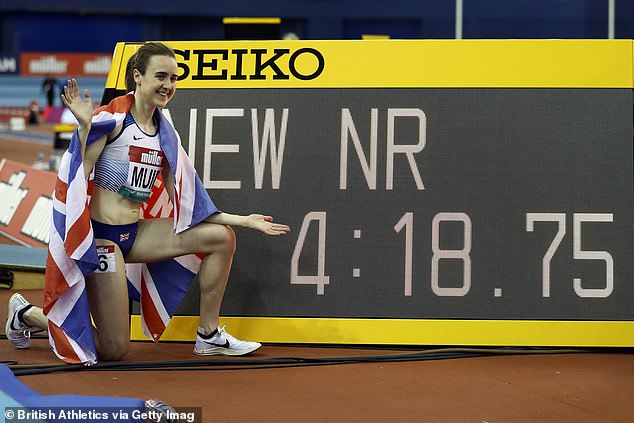 ‘To compare where I am this year with last year, I am in an awful lot better position for the postponement.

‘I say this touching any wood I can find but everything is fine. I feel a lot more robust. I honestly can’t remember now the last time I missed anything with a niggle.

‘It is why my run in the Doha final was quite bittersweet. I think that (without the calf injury) I would have been able to run a British record.

‘At the same time as being gutted to run that well and still not win a medal, it was a big confidence boost in a sense of knowing, “Yeah, if I can run that well when I was not 100 per cent, then what can I be capable of?” It was bittersweet, but better to happen at a worlds than an Olympics.’

Whether Muir at full fitness is able to land a 1500m medal in Tokyo remains to be seen, and likewise if it will be a fair fight.

The 1500m is a race with a complicated past and there has long been a cloud over Dibaba, who was coached to the top by Jama Aden, a man wanted by police in Spain on doping charges. Ditto over Hassan, whose coach was Alberto Salazar. Muir spoke five years ago of ‘doubts’ over whether the result of that Olympic final could be trusted, which is a regrettably familiar consideration in athletics. 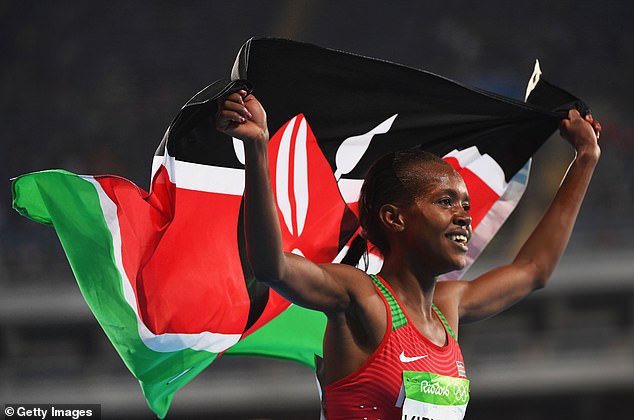 Other mysteries surround the true form of any middle-distance runner at a point when shoe technologies are forcing us to redraw what we consider to be a fast time or merely a very quick one.

‘It is difficult but it’s always difficult to tell in the 1500 anyway because it can be run in so many different ways — it is a tactical distance,’ says Muir, speaking at a product launch for Mullerlight Limited Editions, for whom she is an ambassador.

A decision has not yet been made on doubling up and what would be a fascinating showdown at 800m with her fast-rising training partner Jemma Reekie, but irrespective Muir will fly east under a bright spotlight.

She has had only two races so far this season, during which she set a British indoor record in one and won comfortably in the other.

‘A nice sign,’ she says. And it’s true. But her goals this year are far bigger.

Laura Muir is a member of the Müller Athletic Squad

The fiancée of the Saudi journalist allegedly murdered on the orders of Crown Prince Mohammed bin Salman today accused the Premier League of allowing...