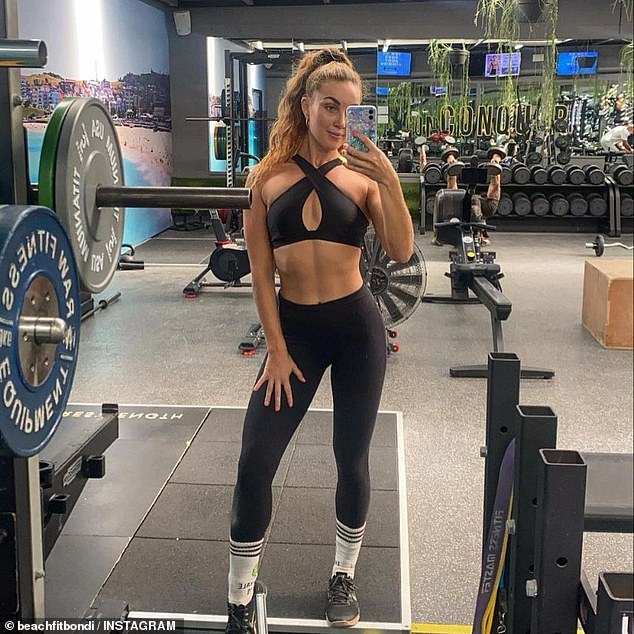 Most major Sydney gyms are set to follow government guidelines and re-open next Monday to fully-vaccinated patrons, although some have decided to wait until everyone can workout together on December 1.

In line with NSW Health guidelines, gyms can re-open to fully-vaccinated customers once 70 per cent of the state’s population has received two Covid jabs.

That milestone will be reached on Wednesday or Thursday this week so that freedoms are introduced from October 11.

Government guidelines say to use a gym from next Monday you must prove you are double vaccinated and wear a mask unless out of breath, take your own towel and in many cases submit to a temperature scan.

Beach Fit Bondi is one of many Sydney gyms re-opening on Monday, October 11. Despite the fitness industry being devastated, gymgoers are excited to get back to their workouts. Lulu Dawson is pictured working out at Beach Fit Bondi before Sydney’s latest lockdown. 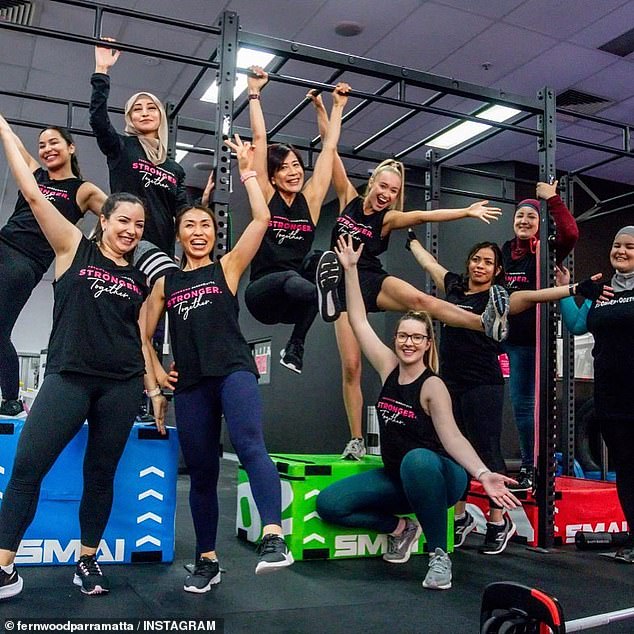 Fernwood women’s gyms will be open on October 11. The team at Fernwood Parramatta are pictured 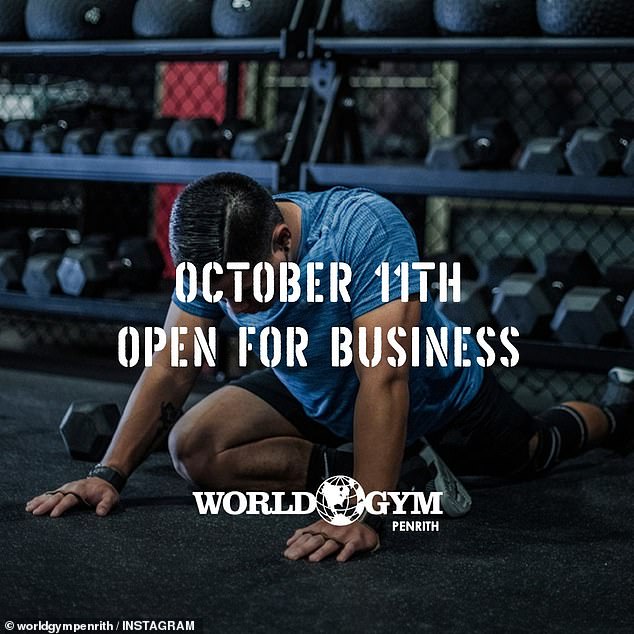 Double-vaccinated patrons will be welcomed back at establishments such as World Gym, which has nine locations in NSW, next Monday. 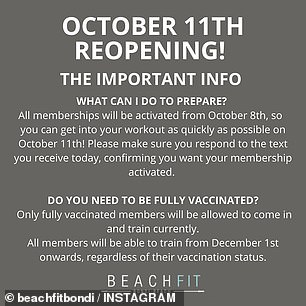 Jetts 24 Hour Fitness at St Leonards could be the first place to go for a proper gym workout, vowing to re-open at 12.01am on Monday morning.

Its members have been asked to ‘upload’ their vaccination passport for approval before then.

Fitness First is also asking customers to do the same – or ‘provide proof of medical exemption before they can get back to training in the gym’.

Fitness Playground sites in Sydney’s inner west will also be among the first up and running.

A weights class will be run at Marrickville at 6am on Monday October 11 and a high intensity training class will start at the same time at Newtown.

Fitness playground franchisees will also continue zoo classes for the unvaccinated and those fearful of Covid.

But a handful of gyms have refused the chance to re-open on that date, including Hardcore Gym 24/7 in Carlton.

It rejected the chance to re-open next Monday as a stand against mandatory vaccines.

‘The vaccination passport goes against our values, not only as business owners, but also as humans that are part of a free society. We value people before profit,’ Hardcore Gym’s owners said in a statement.

Typical conditions of entry for Sydney gyms on October 11

All staff and users must be double vaccinated

Bring your own towel, mat and water  (No towel, no entry)

Have your temperature scanned by staff

Wear a mask unless out of breath

Class sizes to be capped so book prior

Wash hands before and after using machines

Maintain a safe distance between you and other members

Based on Fernwood gym guidelines

Under the official NSW Health guidelines, residents who are unvaccinated can only return to the gym on December 1.

It is widely accepted the more people received a recommended vaccine, the more likely a public vaccination program is to work.

Josh Michael, who co-owns Strive Smart Gym at Parramatta and Marsden Park, will re-open October 11 but he expects to lose half his customers and most of his staff over the decision.

‘It is a big issue, for sure,’ Mr Michael told Daily Mail Australia.

‘We will probably lose 50 percent of our members, some of them are unvaccinated because they can’t have the jab and some don’t want it… others are just scared of getting Covid.’

Mr Michael says a week out from opening the only staff guaranteed to be there are himself and his business partner.

‘Most of the staff don’t want to come back, so next Monday at 4am it’ll probably be just me.’

While most Australian gyms have survived the pandemic, the fitness workforce has been devastated.

Mr Michael has kept the business afloat running zoom fitness classes for up to 60 people.

Fitness Australia told Daily Mail Australia that 80,000 of the 140,000 people working in fitness have left since March 2020.

Mr Michael is concerned about people with fake vaccine passports, but he won’t be letting anyone in until he’s 100 per cent happy customers are fully vaccinated.

‘I may get them to open their Medicare app, once the doors open, we’ll see what happens then I’ll make the judgement.’ 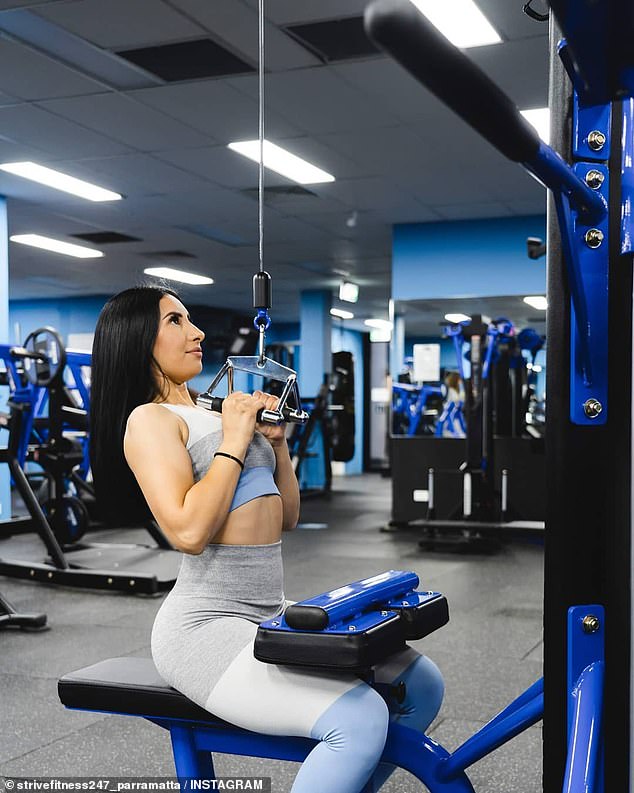 Strive Fitness is set to re-open on Monday, though its co-owner Josh Michael says it could just be him and his business partner serving customers for 15 hours straight 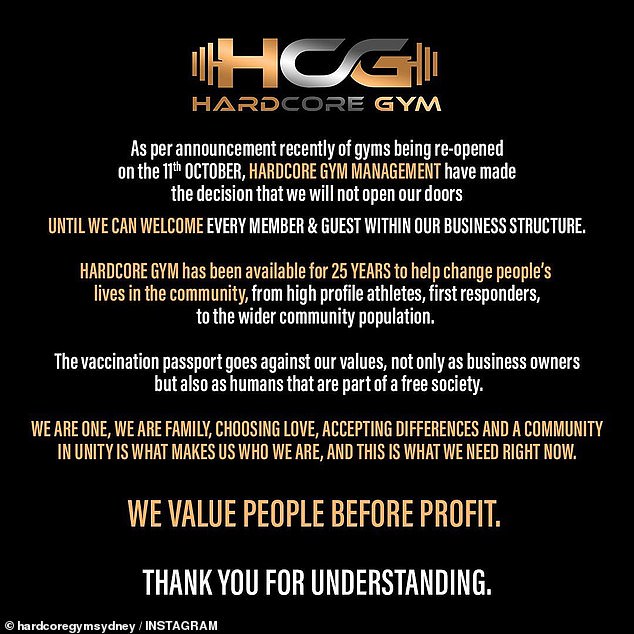 Fitness Australia ran webinars in the past week to help gym owners deal with everything from the vaccine passport system to how to how to confront vaccine sceptics.

Some of these were run by counsellors.

‘That was so staff at the gym door could diffuse a situation if it arose over whether a person is vaccinated or not,’ said Barry Elvish CEO from Fitness Australia.

He was ‘not aware of any members’ refusing to reopen over public health orders and guidelines.

‘There was some confusion about whether staff had to be vaccinated, but that’s now been clarified. It would be crazy for staff to not get vaccinated if members need vaccination.

Fitness Australia has also given guidelines to thousands of gyms over when to wear a mask.

Mr Elvish said using a pin-loaded weight machine, or walking on treadmill, are examples on when it’s reasonable to keep your mask on.

‘But it depends on your level of fitness and how doing those activities affects your breathing.’

Mr Elvish believes ‘the only reason gyms wouldn’t be opening if they’ve calculated the dollars and cents they’re operating in areas with low vaccination rates or getting messages from members.

‘But it makes sense that after 100 days and counting that they’d opening as soon as possible.’

Just a week out from October 11, thousands of gymgoers who use several major chains remain in the dark about what their access will be. 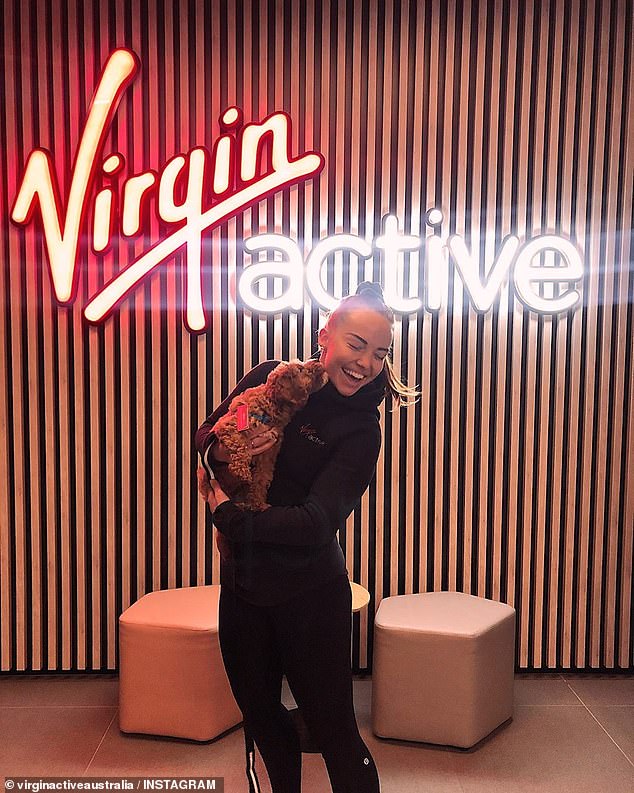 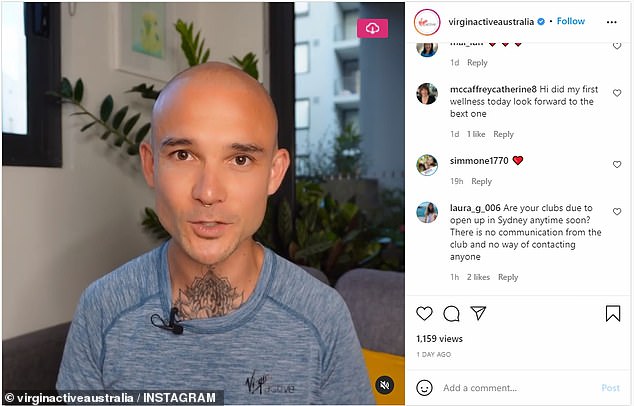 Chains that had not publicly committed to reopening with the majority as of Monday afternoon include: Virgin Active, Plus Active, Anytime Fitness and dance studio XTEND Barre – which between them have hundreds of locations and thousands of members.

Virgin Active have no classes listed and the brand hasn’t answered questions from followers on social media asking if its gyms would be open on October 11.

A spokeswoman for Collective Wellness, which manages the Anytime Fitness and XTEND Barre brands, said: ‘We are currently working through our re-opening plans and have no further comment’.

It is likely any decision made by these brands either way would be posted to social media.

A statement from F45 Panania to members confirmed it would re-open October 11, but stressed that doesn’t mean it holds any opinion on vaccines.

‘Please note that F45 Panania respects each individual’s choice regarding the vaccine and if you are currently unvaccinated we would still love for you to join us when the whole state reopens for both vaccinated and non vaccinated.’

‘It has been a tough year for everyone, but we know we will emerge stronger than ever, together,’ said a statement from all-women’s gym Fernwood, which has 70,000 members.

To enter a Fernwood Gym, members need to upload verification of their Covid-19 vaccine status, showing they have received both vaccinations before being given an access key.

They must also have their temperature scanned by a staff member.

‘Please keep in mind, these mandates have been set by the government. Our staff have worked tirelessly to prepare the club for reopening, and they are following the government mandates.

‘We ask that you be kind to our staff,’ a Fernwood statement says.

A statement from Fitness First said it would ‘welcome back unvaccinated members later in the year, though we recognise this is a matter for State governments.’

Fitness First added it would be guided by Victorian government advice on when it could reopen for Melbourne members.

Daily Mail Australia has contacted gyms mentioned in this article for further comment.

Saul Niguez was once seen as Spain's Steven Gerrard but he...

Mohamed Salah ‘wants to remain at Liverpool but there has been...