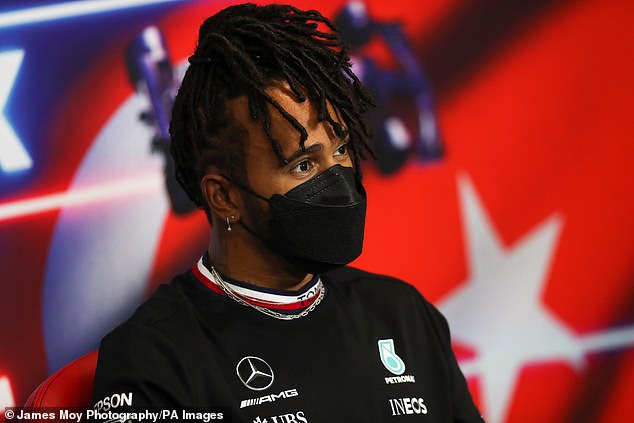 Lewis Hamilton’s bid to land a record eighth world championship has taken a severe blow after he was hit with a 10-place grid penalty for this weekend’s Turkish Grand Prix.

After winning the Russian Grand Prix last time out in front of chief title rival Max Verstappen, the Brit heads into Istanbul with a narrow two-point lead at the top of the driver standings.

However, his Mercedes team have been forced into an engine change ahead of Sunday’s race, taking him over the allocation of three available to him over the season leading to his demotion down the grid. 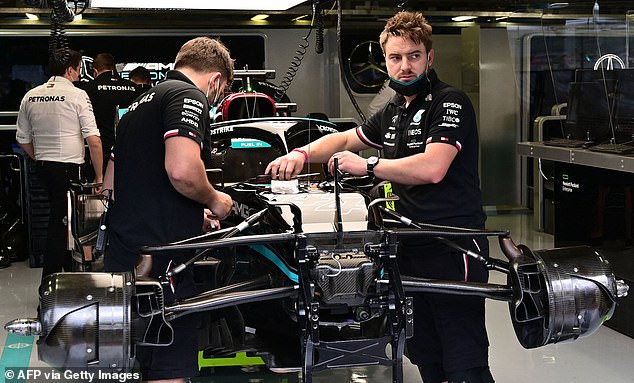 Following Hamilton’s engine failure in practice at the Dutch Grand Prix, the Silver Arrows had reliability concerns over their two remaining power units and changing the engine now limits the nightmare scenario of him suffering an engine failure during a race.

Confirmation of the change was made by the FIA and the team after the start of first practice where Hamilton ended the session comfortably fastest.

The move comes after Verstappen himself took a similar penalty last time out in Russia, with the Red Bull star forced to start from the back of the grid after changing his engine and additional components before capitalising on a late downpour to secure a morale boosting second in Sochi.

Hamilton had been coy over whether his team would need to take a penalty, saying: ‘At the moment, I still have engines numbers two and three. I do not envisage us having to take the penalty at the moment but that could change.’ 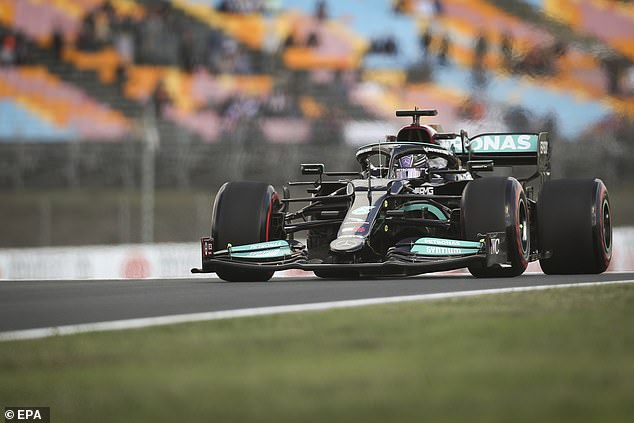 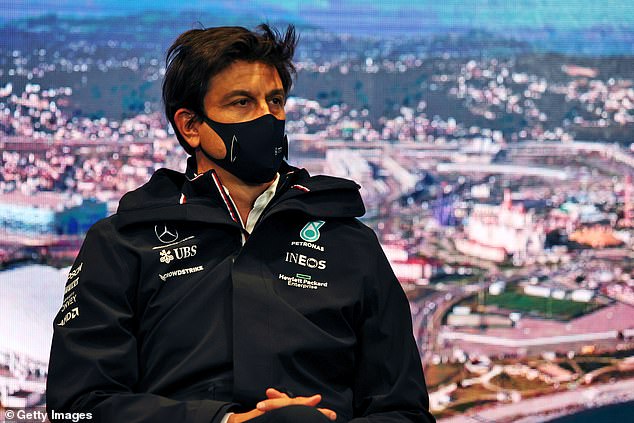 WHY DOES HAMILTON HAVE A PENALTY?

Each driver is only allowed to use three engines over the course of the season – being free to interchange between them over the year.

However, after one of Hamilton’s engines failed in Holland earlier in the season, it left the Brit in a precarious position of having only two engines to rely on for the remaining nine races.

By opting to use a fourth early, Hamilton can cover the huge risk of suffering an engine failure during a race that could cost him vital points in the world championship  – and would have triggered a penalty for needing to use a new engine anyway.

Despite the blow of the engine penalty, Hamilton can take solace that Istanbul Park does have the potential for providing overtaking, especially on the long straight near the end of the lap.

With rain also forecast for the race, it lends more chances for the 36-year-old to overtake giving his strength driving in the wet, proven last year when in slippery conditions he claimed his seventh world championship in Turkey following a stunning win.

An engine change was always likely for Hamilton heading into the final seven races of the season and team boss Toto Wolff previously stated that taking a penalty covers the potential for an in-race failure, which would result in Hamilton having to suffer a grid penalty for an engine change regardless.

‘We believe that between P1 and P2, with the fastest lap, that if you have one DNF it needs the other guy four races to catch up,’ Wolff said.

‘And that’s brutal. So you can afford to finish four times in second [place]. Therefore, you just need to really play it safe while not giving up performance.’

Meanwhile, it was also confirmed Ferrari’s Carlos Sainz would start from the back of the grid after his car also took a range of new components including an engine change. 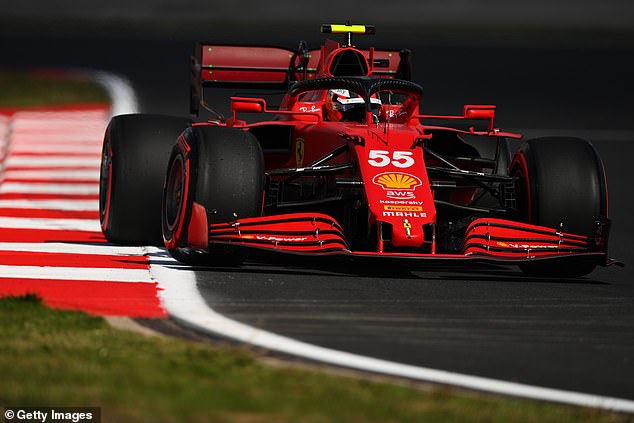 Carlos Sainz will start from the back of the grid in Turkey, having changed his engine as well as additional components

Hamilton was given a boost after easily going fastest in practice ahead of the race in Istanbul on Sunday.

Hamilton was more than four tenths quicker than Verstappen with a time of 1:24.178 during the morning session, before then edging out Charles Leclerc’s Ferrari in the afternoon to complete a Friday clean sweep with an even quicker 1:23.804.

It boosts his hopes that he could have the pace to make overtaking cars on Sunday easier following his grid demotion.

Leclerc was only slightly off Verstappen’s time to complete the top three for Ferrari in the morning before impressively getting to within two tenths of Hamilton in the afternoon. 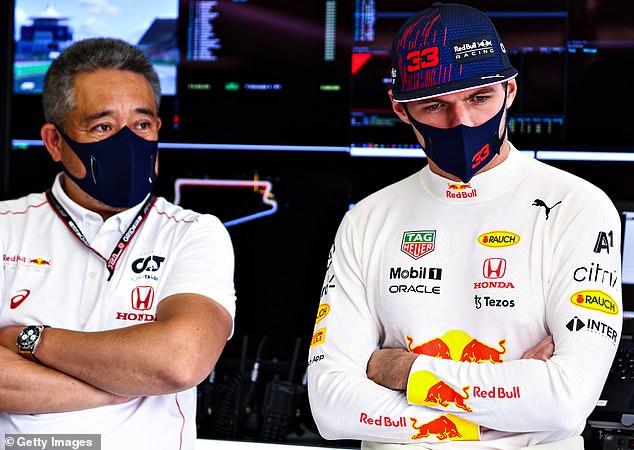 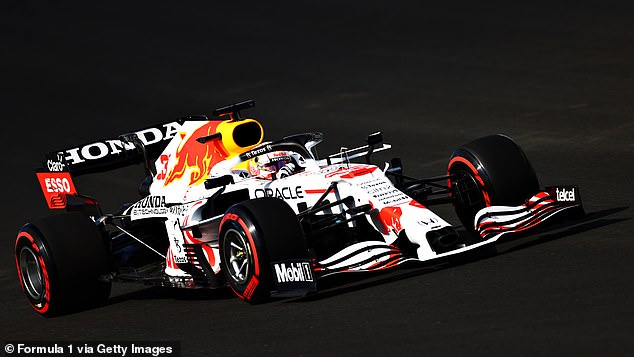 Red Bull, racing in their new one-off white livery, will hope Verstappen can take full advantage of Hamilton’s engine issues this weekend to reclaim the lead in the world championship

Valtteri Bottas was third fastest in front of Red Bull duo Sergio Perez and Verstappen – who completed the day six tenths down on Hamilton in a disappointing fifth.

The Dutchman struggled with understeer during Friday but team boss Christian Horner was confident they could correct the balance issues with his Red Bull after studying the car overnight.

‘We have a little bit of a balance mish-mash, Horner told Sky Sports. ‘We are just a bit out of the window with Max. We will be burning the midnight oil looking to correct it. It’s just about understanding more with the car.’

Having narrowly missed out on victory last time out in Russia to Hamilton following a late downpour, McLaren’s Lando Norris was a bit further off the pace finishing slightly behind Verstappen in sixth.