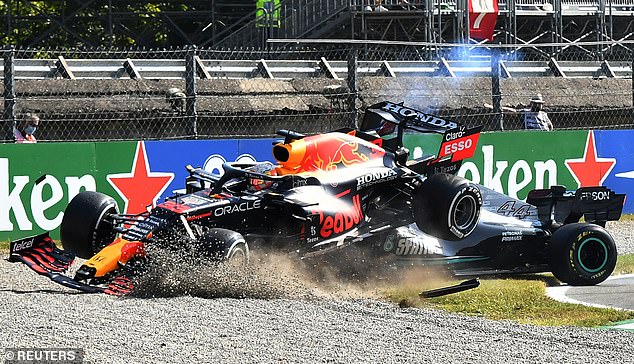 ‘Thank God for the halo, his head could have been taken off’: Relieved F1 fans declare it a ‘miracle’ that Sir Lewis Hamilton survived dramatic crash with title rival Max Verstappen at the Italian Grand Prix

Formula One fans declared it a ‘miracle’ that Sir Lewis Hamilton is safe and well after a dramatic and dangerous crash with Max Verstappen in the Italian Grand Prix.

Title rivals Hamilton and Verstappen were involved in a frightening and serious-looking incident at Monza on Sunday. The Red Bull driver’s car flipped up as the duo clashed over track position, with the rear landing on the Brit’s Mercedes. 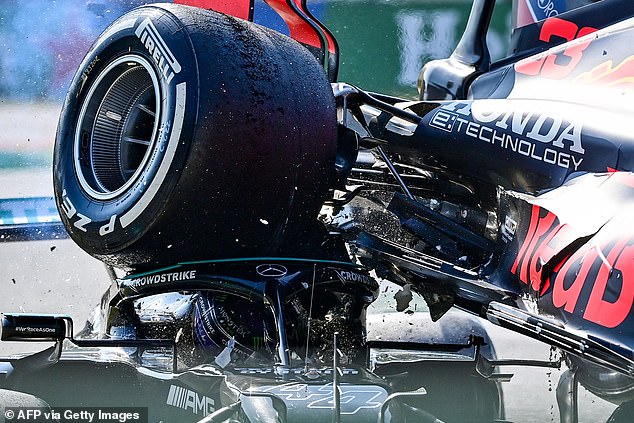 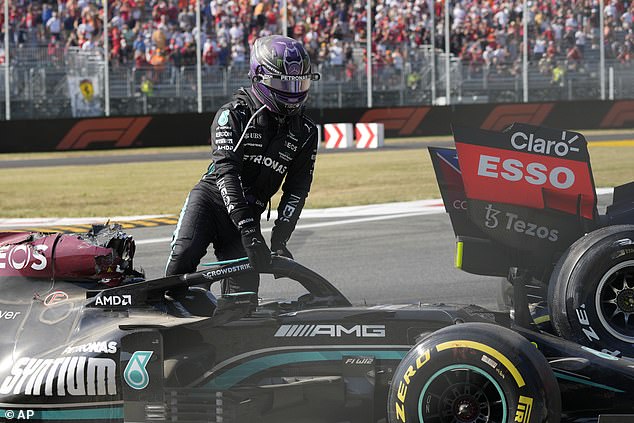 And F1 supporters quickly took to social media to express their gratitude that the seven-time and reigning world champion avoided serious injury.

One said: ‘Hamilton would’ve died today if it wasn’t for the halo,’ with another adding: ‘Thank God for the halo, Hamilton’s head could have been taken off’.

A third tweeted: ‘Hamilton almost died today had Verstappen’s tyre been spinning out of control in the air. A miracle is what I think we saw today. I can’t believe they walked out frustrated but without any injury’.

Another fan simply posted: ‘Halo appreciation tweet #Hamilton,’ with a fifth continuing: ‘Thanks Halo. Thanks @fia’.

A sixth tweet said: ‘Verstappen literally drove over Hamilton’s head and didn’t even bother checking – if the halo wasn’t there, I can’t even imagine what could’ve happened. You can’t call anyone’s sportsmanship out if you don’t have any yourself’

The crash happened in the 26th lap of the race, with Hamilton leaving the pit lane and by chance being faced with his title rival.

Hamilton, holding the inside line, came up against Verstappen on the outside, with both jostling for position going into the Rettifilo chicane.

The Dutchman, pushed to the edge of the track, saw his car hit the kerb and career into the air, landing atop Hamilton’s cockpit, with both cars stuck on the gravel and both drivers out – meaning Verstappen stays five points ahead in the title race.

However, Verstappen has now been given a three-place grid penalty at the Russian GP for his role in the incident. 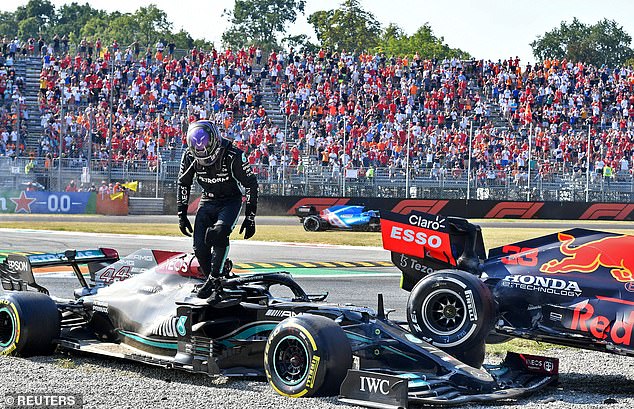 Hamilton said: ‘I’m a little bit stiff and sore on my neck because it landed on my head but I’ll be OK. I came out, saw… Max was coming and I made sure to leave a car’s width on the outside. I was ahead into turn one, turned into turn two and then Max was on top of me.

‘It’s exactly the same scenario that happened at Turn Four [at Imola earlier in the season] where I was in the same position as Max and I gave way, that’s racing – this time he didn’t want to give way. He knew what was going to happen as soon as he went over the kerb but he didn’t back out – I don’t know what else to say.’

But Max Verstappen responded: ‘We knew it would be tight. I went around the outside and he kept on squeezing me. I just wanted to race. People will start to talk about Silverstone but I didn’t expect him to keep on squeezing and squeezing because we still would’ve had a car’s width out of turn two. 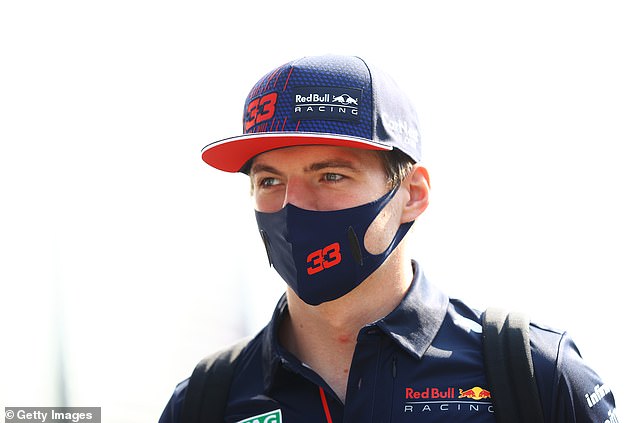 ‘I don’t know why he kept pushing wider and wider. You need two people to work together to make the corner work but unfortunately, we touched. If one guy is not willing to work, it is not going to happen.

‘It’s very unfortunate what happened but I think we are professional enough to step over it. I think for sure we can talk about it.’

McLaren’s Daniel Ricciardo eventually won the race, with his British team-mate Lando Norris coming in second to give his team their first win for almost a decade and their first one-two since the 2010 Canadian Grand Prix.

India players were ‘dead scared’ they had Covid so refused to...

India players were 'dead scared' they had Covid so refused to...

Fernandinho confirms City had a ‘considerable chance’ of beating United to...

Chelsea star Romelu Lukaku is the No 1 striker in the...