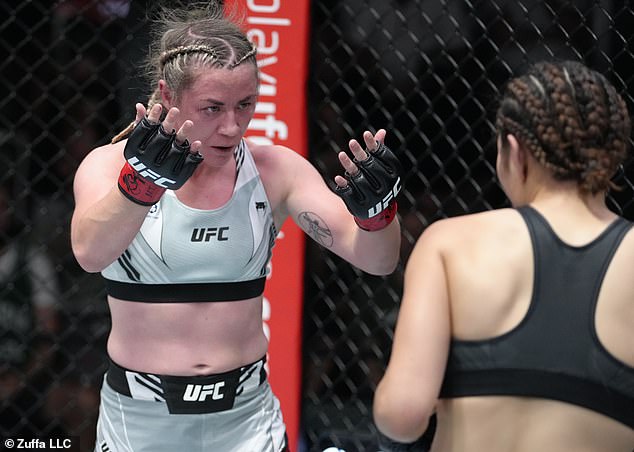 Few mere mortals can imagine getting out of bed with a couple of torn knee ligaments and damage from a dislocated shoulder, let alone fight.

But Molly McCann stepped into the octagon on the biggest night of her career, her UFC contract on the line, with more than just Ji Yeon Kim to overcome.

Back against the wall, she threw the kitchen sink at the South Korean and any other appliance she could get hold of for 15 minutes of pulsating action that saw McCann earn victory and a $50,000 Fight of the Night reward. 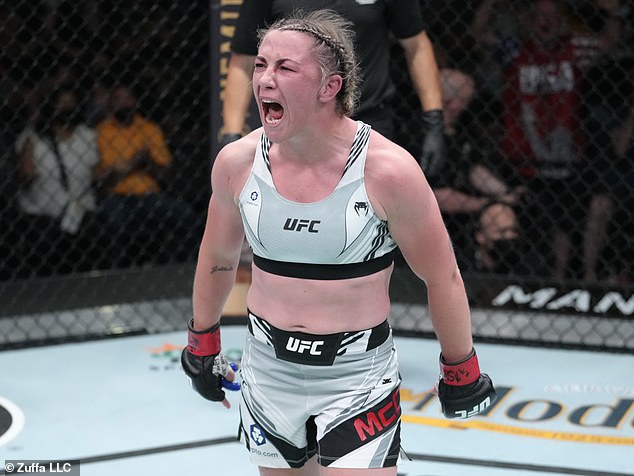 The video of the Liverpool fighter finding out she had bagged the bonus went viral and she explained just how much the recognition for her work means.

‘I felt so much gratitude that the big wigs finally saw my worth,’ she told Sportsmail.

‘When you get the Fight of the Night bonus, sometimes it means more than Performance of the Night because it is three hard, slogged out rounds.

‘I think I’ve been pipped to the post a few times, to finally get recognition from peers, colleagues and people in the UFC, you couldn’t put it into words.’

To say McCann entered the fight without being in peak condition would be a grotesque understatement.

At times, she needed painkillers just to sleep and admitted to mentally pretending that Kim, Saturday’s opponent, was the root cause of it all.

‘I dislocated my shoulder last August and it’s been giving me grief ever since and from that I was getting sore ribs, the muscles around it,’ she said.

‘In the last three weeks I was sparring and we both (sparring partner) popped each other’s knees out. I had grade two tears in both ligaments and a broken knuckle. 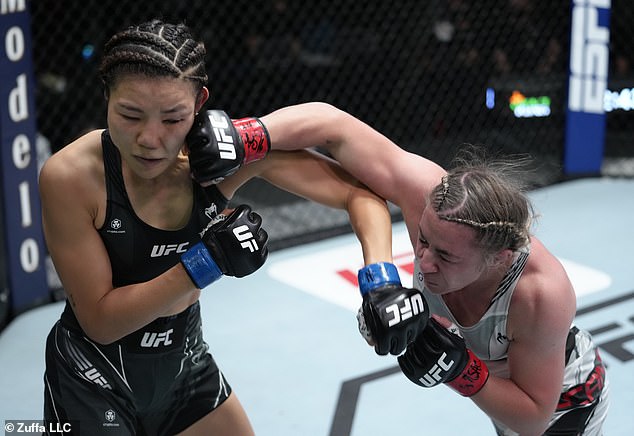 ‘I was just thinking “oh my God, how am I getting through this”. The camp had been 15 weeks, like two camps together but I was not in a position to pull out and really had to show my worth.

‘Every session I went into, I had to think it was her (Kim) fault that I was injured. I just had to punch her head in, she was the muse, the reason why every day I’d have to take painkillers to go to sleep.

‘It prepped the mind for war and I wouldn’t change it. I was a moaning bas**** every day after training but f***ing hell it gave me the best result of my life!’

Even though the Apex Arena in Las Vegas is hardly a cauldron of noise, the fact that there were at least some allowed in to watch gave McCann a massive boost.

‘It was like watching the Premier League last year with no fans and then coming to the Euros with fans and it did bits for England,’ she reflected. 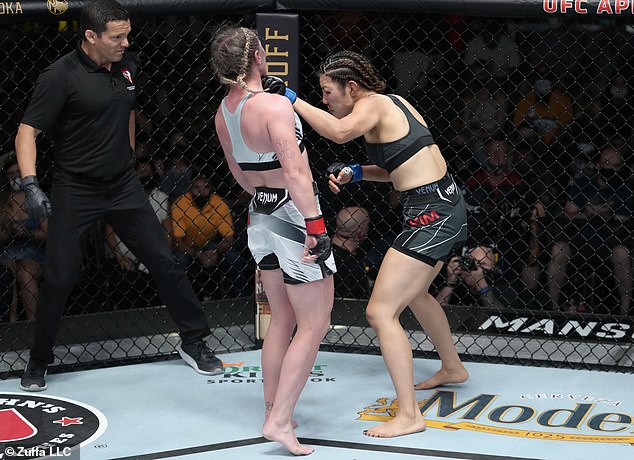 ‘That was like me, I just need it, I’m a prize fighter, I love fighting for the fans, you could hear them screaming for me in the Apex and most people were invite only so it goes to show the bond I have with them and I have a style they want to watch. Give me fans and pressure and always come out on top.’

Even an accidental headbutt to the temple could not stop McCann, who was felled by the collision in the first round. She fought back admirably despite giving up a huge reach advantage but it was fight IQ, not just guts on show.

McCann knew she had to dictate the pace and watched clips of other top UFC stars negating reach disadvantages in her preparation.

‘I believe when I set the pace nobody can get into their rhythm, it was all about range management, she should have dictated the range with her reach advantage,’ McCann continued. 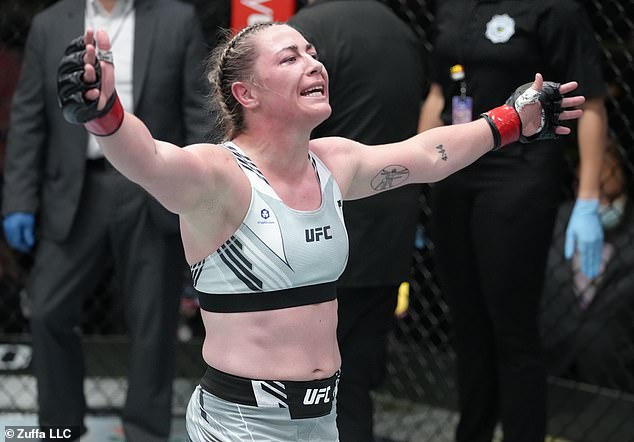 ‘F*** knows how someone with less than 10 inch reach advantage wins a boxing match, I couldn’t throw kicks because she could still punch me, her arms were that long, I was just doing what needed to be done to win.

‘I watched a lot of Cormier, Petr Yan and Max Holloway, just how to dictate pace as a smaller fighter. It took me the first round to understand it and get over the nerves. I was shocked at how much I was able to put it on her.’

By the end, there was clearly only one winner and there’s no surprise that $50,000 found it’s way to McCann’s bank account.

Although she did not speak to Dana White directly, ‘Meatball’ revealed that the UFC president helped fuel the post-fight party.

‘I haven’t spoken to Dana but I was with Jack Shore and Paddy and Jack’s Dad and I was drinking whiskey and tagged Dana saying to sort us out. 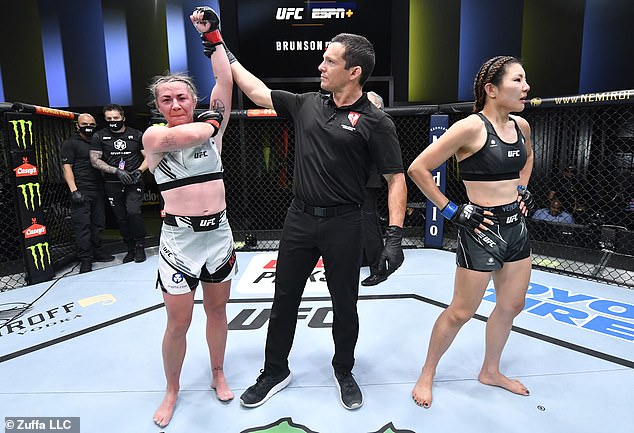 ‘Two hours later we had two crates dropped off. We got bladdered and it was an uncomfortable flight back, let me tell you that much.’

Flying back from Las Vegas with a sore head was always to be expected but McCann will resist the urge to splurge her hard won cash.

‘When I landed, I did end up getting a few pints delivered, a video went round saying “I finally got me bevvy lad”.

‘Everyone and his dog has offered me free food but I’m going to try and half be ok and not take the p*** and get too fat because I hate cutting weight. A few Everton games and a couple of pints, that’s what I’ll have.’

Lando Norris dethroned Lewis Hamilton as the youngest-ever British pole sitter and went back to his hotel room to celebrate with apple crumble...

Valtteri Bottas on pole for Sprint Race at Italian GP ahead...

Aljamain Sterling hits back after Petr Yan branded him a ‘sneaky...