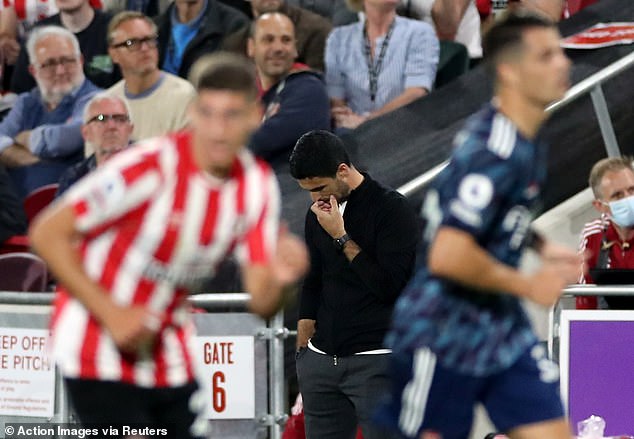 Arsenal’s Premier League campaign got off to a disastrous start with a 2-0 defeat away to Brentford and Mikel Arteta must now act quickly with daunting tasks against Chelsea and Manchester City on the horizon.

Even when it is taken into account that they were missing a host of key players, the Gunners’ performance against Brentford was woeful as they succumbed to the newly-promoted side.

Martin Odegaard and Aaron Ramsdale’s imminent arrivals from Real Madrid and Sheffield United respectively address some of the problem areas but there are still many other issues that need to be addressed.

Here’s a look at what Arsenal need to sort in an attempt to ensure they don’t end up with zero points out of a possible nine from their first three games.

It is clear that Arsenal need greater variety in their game and there is an overreliance on Emile Smith Rowe and Kieran Tierney to create chances, with the latter frequently pushing forward from left-back and delivering crosses.

Under Arteta Arsenal’s play seems too precise, with players seemingly not permitted to take risks and often electing for the safe pass as opposed to driving forward. 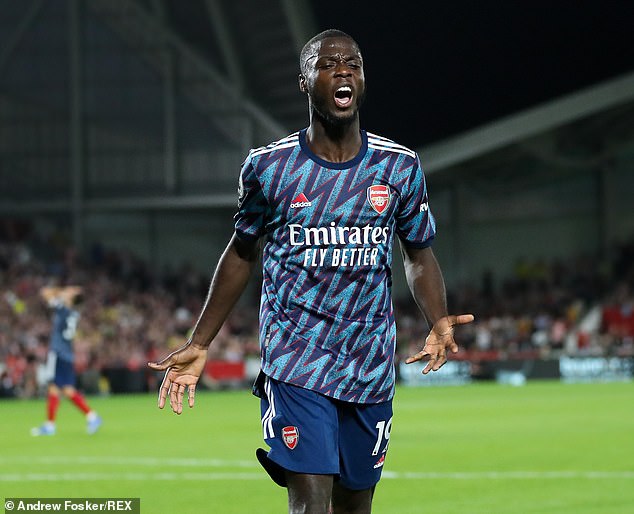 Arteta needs to give Nicolas Pepe, for instance, more licence to come infield on some occasions and have an impact on the game.

Gabriel Martinelli seemed to be under specific instructions as he drifted inside to provide space for Tierney to push forward but this often resulted in the Brazilian becoming a peripheral figure himself. Arsenal weren’t making the most of their best assets.

Another such asset is now set to join the attacking set-up in Odegaard, who combined well with Smith Rowe in the second half of last season, but it remains to be seen how Arteta can tactically get the separate parts to work.

Arsenal are currently without Gabriel Magalhaes due to injury, with Pablo Mari having been given a start against Brentford.

As has been the case on several other occasions, Mari struggled, with the centre-back not strong enough physically, his pace in recovery lacking and his positional sense also questionable.

Arteta’s options in terms of replacing Mari are somewhat restricted at present, but he can bring in Rob Holding, who is capable of playing on the left side of the centre-back pairing. 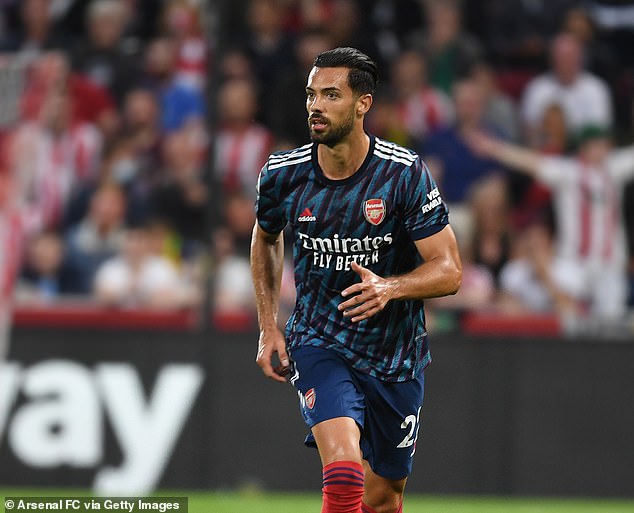 Holding himself isn’t the most reliable player but he should offer more authority than Mari, who will end up costing Arsenal more points if he is persisted with.

Against the creative players that Chelsea and City possess, starting Mari would be a huge risk.

Holding may also prove to be a better central defensive partner for new £50million signing Ben White, who found matters difficult against Brentford.

Calum Chambers is another centre-back option and impressed there under Arteta prior to his serious knee injury in December 2019, but he was another member of the faltering backline at Brentford.

Saka missed the majority of pre-season after representing England at Euro 2020 but was brought on for the final half an hour against Brentford.

While he wasn’t at his sharpest, the winger still helped to improve Arsenal’s attacking play, posing more questions to the hosts’ defence and threatening to get in behind them at any given opportunity.

With another week of training under his belt, Saka should be ready to start at home to Chelsea on Sunday, and Arsenal will certainly need him. 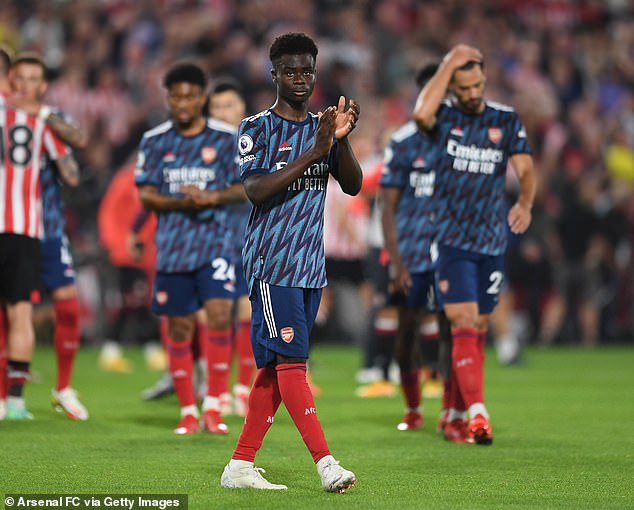 Last season Saka, singlehandedly at times, dragged his team out of difficult situations, and seven goals and 10 assists demonstrated the extent to which his creativity proved difficult for defenders to deal with.

Saka is also capable of combining effectively with fellow youngster Smith Rowe, with the pair having both impressed in the corresponding fixture against Chelsea last season, which Arsenal won 3-1.

The Gunners no doubt have question marks on who should feature more regularly in the forward positions, but Saka is not part of those doubts and should now be thrust back into to aid his struggling side.

Provide clarity on Aubameyang and Lacazette

Even though their consistency can fluctuate and Pierre-Emerick Aubameyang has been a shadow of his usual self for some time, it was clear that Arsenal missed both the Gabon striker and Alexandre Lacazette against Brentford.

Arteta stated that both players were missing through illness but there have been suggestions that the problem could be somewhat deeper.

Gary Neville, for instance, said on his Sky Sports podcast: ‘You can see tonight in his interview after the game… I don’t know if there is something in the Aubameyang and Lacazette in the pre-match, to be fair.

‘I thought there was a little bit of something there where he talked about they are ill earlier on today, that’s all I can say. It was a bit short.

‘I never quite know if there’s some problems deeper, whether he likes his players and I really worry when a manager doesn’t like some of the dressing room.’ 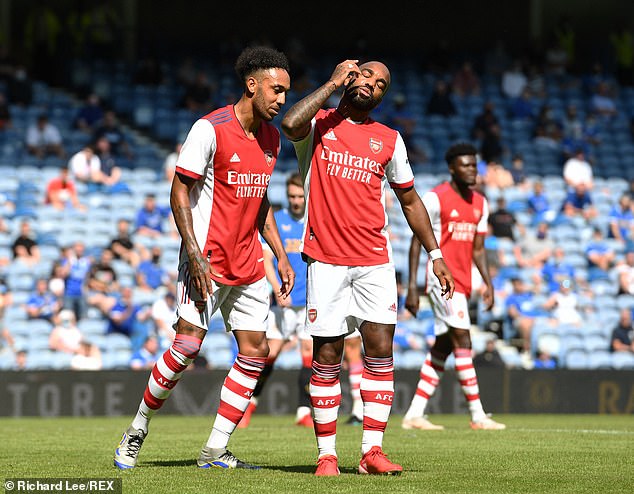 There have been tentative links to Barcelona being interested in the strikers but Arsenal need to address this situation.

With all the other problems they have, Arsenal don’t need this cloud hanging over them as well.

If Aubameyang and Lacazette are unavailable against Chelsea, Arteta needs to provide a detailed explanation why and an indication of when they will be back. Otherwise, the speculation and uncertainty will only increase.

This appears to be on the verge of completion with Aaron Ramsdale set to join, but the Brentford game showed why Arsenal needed to bring in a goalkeeper who can challenge or even replace Bernd Leno.

The German is capable of making fantastic saves at times but makes positional errors – as he did by being beaten by Sergi Canos’ opener – and struggles with playing the ball out from the back.

His passing apparently saw him cop an X-rated earful from Mari and the Germany international’s struggles with the ball at his feet has once again led Gunners fans back to discussing Emi Martinez, who started many Arsenal attacks during his last few months at the club. 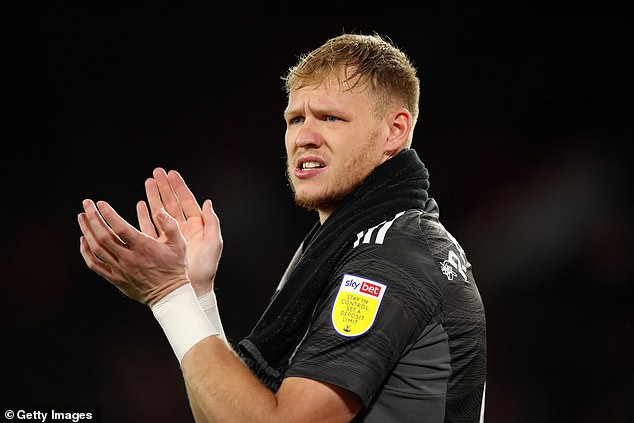 Alex Runarsson wasn’t in the squad against Brentford and has fallen out of favour after an error-strewn start to life as a Gunner, so 19-year-old Karl Hein was on the bench.

Sheffield United now appear to have dropped their £40m asking price for Ramsdale, who is now set to link up with the Gunners after the two clubs agreed a £24m fee plus add-ons.

Reports suggest they have targeted the England international for his ability with his feet, but whether he will be able to eventually make the step up to become Arsenal No 1 remains to be seen.

Overall, there is much work for Arteta to do in a short space of time but he does have resources to use in an attempt to improve matters, and starting Saka in particular would give Arsenal a huge boost.

However, if the defeat to Brentford is followed by two further losses it will inevitably cause further questions to be asked regarding Arteta’s capability for the job.

The warm-up games are done and Euro 2020 is now finally upon us.After being forced to bottle up the excitement for an extra...

Euro 2020: What Luis Enrique must do to salvage dysfunctional Spain’s...

What Arsenal boss Mikel Arteta must do to ensure awful start...