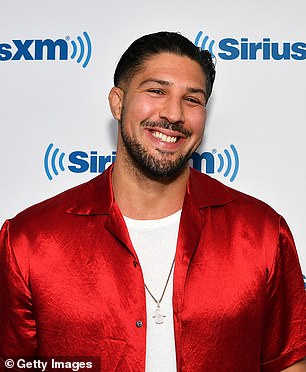 Former UFC star Brendan Schaub helped pull three children out of a car wreck in California after their father allegedly drove straight into an 18-wheeler that killed their mother.

Schaub, 38, said he was driving with his fiancée on the 101 Freeway in Encino last Thursday when he came across the wreckage and spotted one of the four children who escaped the vehicle waving for help.

Schaub, a father of two, rushed over to help the boy when he and another man found three of the sibling’s trapped inside the car. Fuel from impact of the collision streamed onto the highway.

‘I’m running through this … and gas is flowing from the 18-wheeler. God this isn’t safe. I have kids, I can’t go out like this,’ Schaub said as he recounted the story with TMZ.

He said all his clothes reeked of gasoline.

‘I can hear one of the kids yelling that he doesn’t want to die,’ Schaub said as he teared up. ‘I tell him, “You’re not going to die, buddy.”‘ 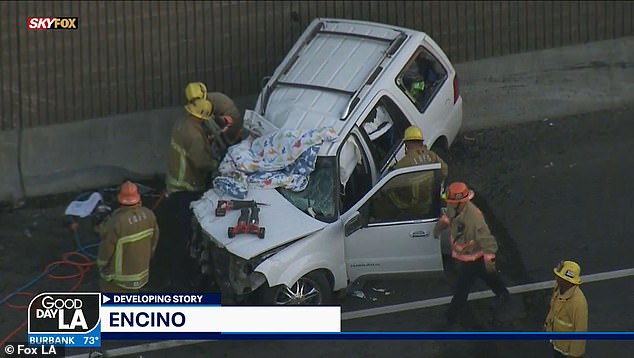 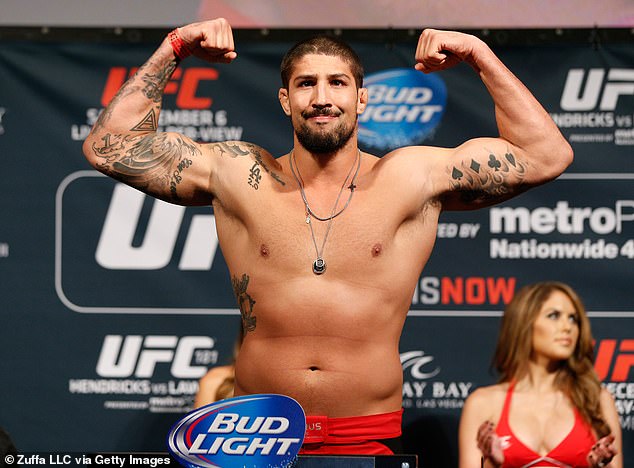 Schaub, pictured at a fight in 2014, said he and another man helped pull the kids out of the wreckage. He said he wanted to hold a fundraiser for the kids and their family

California Highway Patrol officers were able to detain the 31-year-old Torres (pictured) with the use of a Taser. He was ‘combative’ and ‘physically assaulted’ officers, CHP said

Schaub said he and the other man were able to break the window of the car and pull out the three children stuck inside.

Schaub noticed that the children’s mother, Aimee Garcia 26, was dead in the passenger’s seat.

He instructed a woman who also came by to take the kids away and to not let them see their mother’s battered body.

Schaub spotted the children’s father, Cesar Iban Torres, 31, fleeing barefooted from the scene before being hit by a car. Torres recovered and continued running, Schaub said.

Schaub placed a blanket over Garcia’s body and went back to his own car as he prepared to give his statement to police and first responders.

All of the children, whose ages range from 18 months to 9 years old, suffered minor injuries and were hospitalized at UCLA’s Ronald Reagan Hospital.

A GoFundMe page was set up to help pay for Garcia’s funeral expenses and claimed the mother of four was a victim of domestic violence at the hands Torres, for many years. The campaign has raised more than $47,000 as of Wednesday afternoon.

Schaub, who retired from the UFC with a 10-5 record in 2015 for a career as a comedian and hosts a podcast called The Fighter and the Kid, said he would like to hold a fundraiser to help the four children.

‘I keep thinking about the kids. I haven’t been able to sleep. I can’t sleep.’ 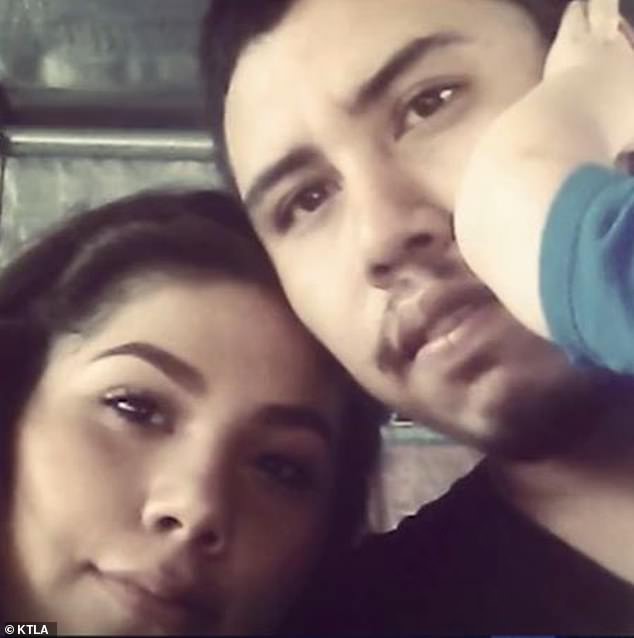 Aimee Garcia (left) was a victim of domestic violence at the hands of Cesar Iban Torres (right), her boyfriend, for many years, her family said 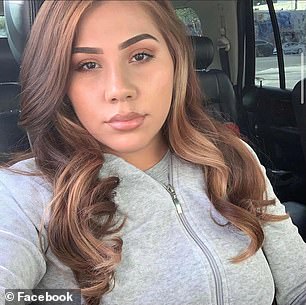 According to her brother, Garcia (pictured) was ‘all about [her] kids’ and she would put ‘them over everything’

Torres had called Garcia’s brother Juan Zavala the day of the accident, telling him that ‘he had to give his family to God’ and that the government was after him, according to ABC 7 News.

Prosecutors say Torres, 31, crashed the family’s white 2003 Lincoln Navigator head-on into a semi-truck on the 101 Freeway in Encino, a neighborhood north of Los Angeles, with the intent to kill his Garcia and their children.

The deranged dad was Tased by cops after resisting arrest and trying to attack members of the California Highway Patrol, reported NBC Los Angeles.

‘A family has been torn apart by this tragic collision that leaves four young children without their mother,’ said Los Angeles County District Attorney George Gascón.

Zavala said that Torres called him hours before the crash and made ‘bizarre and disturbing comments.’

Torres was convinced that the government was after him, Zavala told ABC 7 News.

Zavala said he tried to locate the family but had no luck. After the crash, one of the four boys reportedly told Zavala that their mother fought with their father for control of the steering wheel.

‘He said, ‘Mommy saved us,’ and that broke my heart,’ Zavala said, adding that he wished he could have helped.

‘I’m just broken that my nephews are not going to grow up with their mom, and she put the kids over everything. She was all about the kids.’ 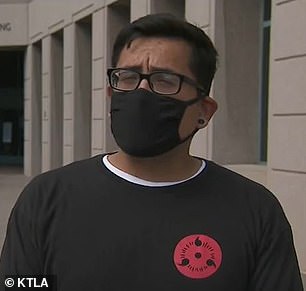 ‘You are responsible for taking my sister’s life away and leaving your children without a mother and father,’ Juan Zavala (pictured), the victim’s brother, said in a message to Torres, according to NBC Los Angeles

‘Thank God, I’m here as a good uncle and a good older brother. I will take responsibility for my nephews because that’s what my sister wanted to do.’

‘It’s sad to know my sister is gone,’ Zavala said. ‘A beautiful soul taken too soon, but I still have four parts of her. I’m gonna make the best of it, and do the best I can.’

Torres was being held at the Twin Towers Correctional Facility in Los Angeles in lieu of $1million bail, according to jail records.

His arraignment hearing at the Van Nuys Courthouse had been scheduled for Tuesday but was rescheduled for a later date.

UFC 264: The greatest trilogies as Conor McGregor and Dustin Poirier prepare to do battle

Addison Rae looks worse for wear as she leaves UFC 264...