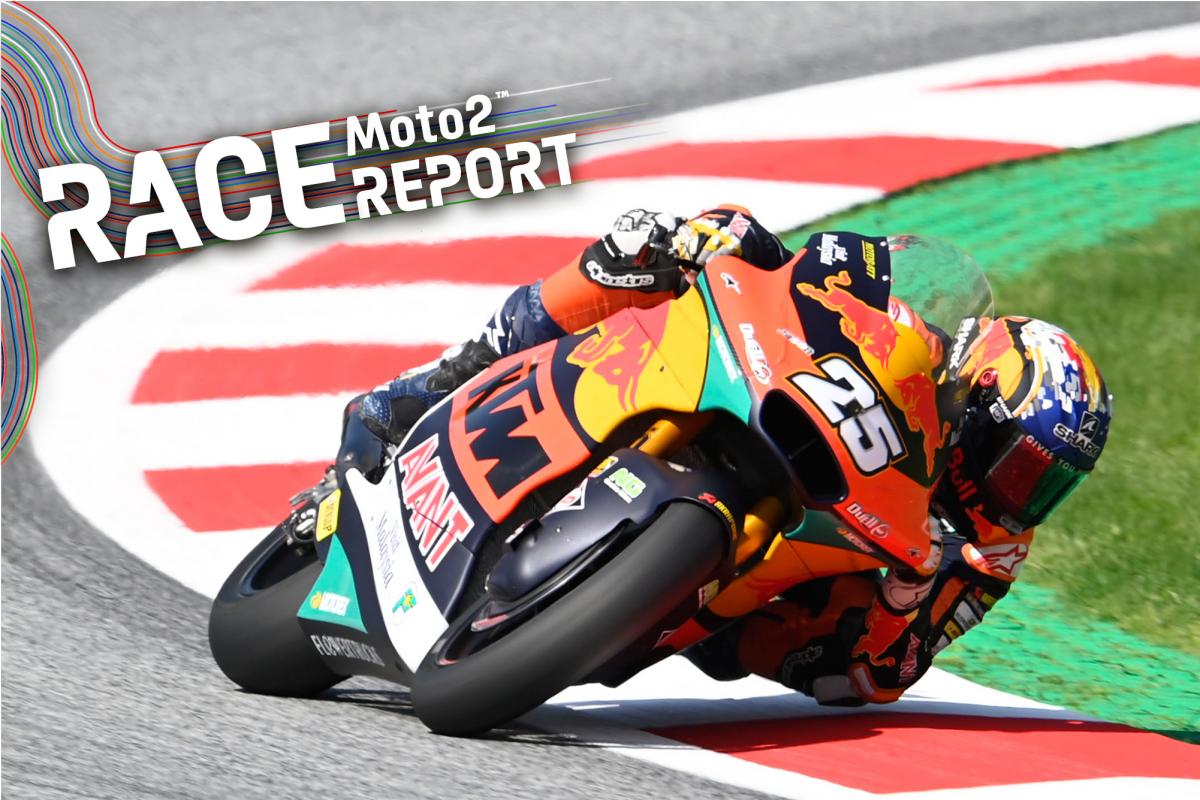 The title race takes a twist in Austria

All three riders on the front row launched away well from the line and it was line astern into Turn 1, Lowes leading Raul Fernandez and Ogura on the opening lap. Drama unfolded further down the pack at the tight Turn 1, which saw Jorge Navarro (Lightech Speed Up) and Stefano Manzi (Flexbox HP40) crash. It also saw Albert Arenas (Aspar Team Moto2) come into pitlane at the end of Lap 1 to retire, with World Championship leader Remy Gardner (Red Bull KTM Ajo) forced down to P10 in the early stages after contact at Turn 1.

Heading into the final 10 laps, it was still as you were between the leading quartet. Lap times between them were almost identical, with no one looking like putting a foot wrong. With four laps to go though, Ogura was starting to make Raul Fernandez sweat a little more. Three tenths split the rapid rookies, with third place Augusto Fernandez and fourth place Lowes watching on from a couple of seconds back. Raul Fernandez then responded to the pressure, the gap was back up to half a second with two laps to go.

Two 1:29.2s saw Raul Fernandez get the gap up to 0.8s heading onto the final lap, and the Spaniard made no mistakes to return to the top step, his fourth win of the season. Ogura produced a phenomenal ride to keep Fernandez honest for a dream debut Moto2™ rostrum, Augusto Fernandez held on to take P3 ahead of teammate Lowes.

Mixed emotions for the points scorers

Celestino Vietti (SKY Racing Team VR46) went toe-to-toe with Somkiat Chantra (Idemitsu Honda Team Asia) as both riders claim their best intermediate class finishes in P5 and P6. That’s the order they crossed the line in, but Vietti was demoted one place for exceeding track limits – P5 for Chantra, an equal best P6 for Vietti.

After being beaten up at the opening corner, Gardner had to settle for P7 to see his title advantage slip to 19 points. The Australian eventually got the better of Aron Canet (Aspar Team Moto2), the Styrian GP podium finisher picks up P8 ahead of Tom Lüthi (Pertamina Mandalika SAG Team). 2.4s adrift of ninth place Lüthi was Bezzecchi in P10, a crash in qualifying ultimately costing the Italian another shot at victory at the Red Bull Ring.

19 points separate the teammates heading to Silverstone, can Gardner bounce back at the British GP? We’ll find out in a couple of weeks’ time.

Every practice session, qualifying battle and race, exclusive interviews, historic races and so much more fantastic content: this is VideoPass!

Conor McGregor insists his shin was fractured BEFORE the UFC fight...

Conor McGregor insists his shin was fractured BEFORE the fight against...

HOT OR NOT: John Stones has been absolutely colossal for England...