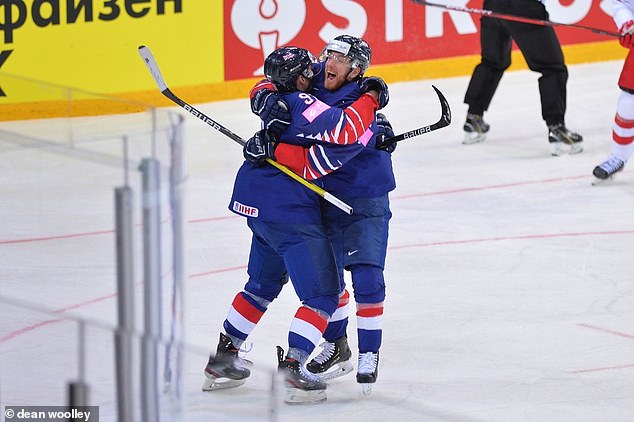 Great Britain once again came agonisingly close to a big upset World Championships victory when Denmark needed overtime to defeat them 3-2 in Riga on Tuesday.

GB took their first point of this yearâ€™s tournament on Tuesday when they held the Danes, who had defeated highly fancied Sweden in their first game, to a 2-2 draw after regulation time.

But Britain ran into penalty trouble in the extra sudden-death five minutes and, with Ben Lake sitting in the box on a tripping call, Markus Lauridsen fired home the winner for Denmark and averted a shoot-out with just 25 seconds left.

It was heartbreaking for GB but this was another example of their huge improvement in their second campaign back at the highest level after a 25 year absence.

They have said they want to compete rather than just make up the numbers and they are doing that the more the tournament goes on.

And, remarkably, as it stands GB have a better record at this yearâ€™s competition in Latvia than Canada and Sweden, two of the giants of the game.

â€˜That penalty cost us in overtime,â€™ admitted GB captain Jonathan Phillips, who was making his 100thappearance for his country. â€˜It was a bit of desperation really and there was only so many chances we could give them. 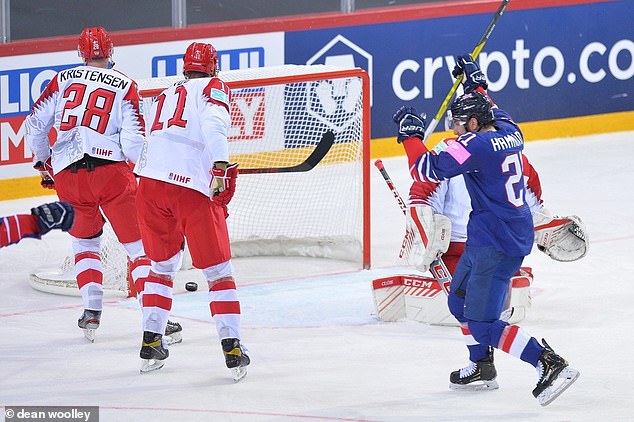 Mike Hammond was on target for GB, scoring late to take the game to the extra period

â€˜But weâ€™re really disappointed to just get one point. Weâ€™ve just got to keep going now. Weâ€™ve always had a never say die attitude and each day we get better and keep building. If we keep doing that the wins will start coming for us.â€™

Denmark inflicted on GB the worst result of their return to the highest level of the World Championships in Kosice two years ago when they crashed to a 9-0 thrashing.

But this was always destined to be much closer from the moment GB took the lead for the first time in the tournament in their third game.

Ben Oâ€™Connor, GBâ€™s outstanding defenceman, fired home from the point into the top corner of the Danish net with two minutes 33 seconds on the board.

It was to prove a short-lived advantage. Julian Jacobsen equalised for the Danes and then their best player Nicklas Jensen gave them the lead when he took advantage of a penalty call on Ross Venus to fire past Ben Bowns on the power-play.

Britain, who lost 7-1 to Russia in their first game but then slipped to a narrow 2-1 defeat to Slovakia in their second, were far from beaten and saw good second period chances through Liam Kirk, Lake and Robert Dowd saved by Sebastian Dahm. 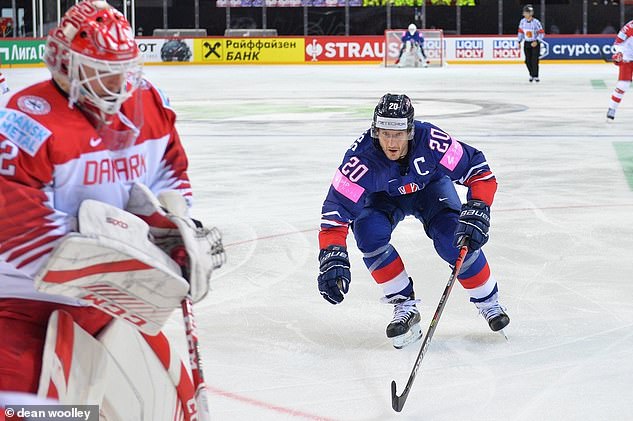 The equaliser that GB richly deserved came as time began to run out in the third period. Mike Hammond, who played club hockey in Denmark earlier this season before joining Coventry for the Elite Series, fired home a pinpoint pass from Lake.

That strike got them on the board and GB, who out-shot Denmark in the final two periods, would have fancied their chances of winning a shoot-out with Bowns again in outstanding form, making another 25 saves in regulation time alone.

GB thought long and hard about leaving Bowns out for this one to give his back-up Jackson Whistle another game and save the Yorkshireman for Wednesdayâ€™s winnable encounter against Belarus.

â€˜A lot of us have been together for a lot of years now and the brotherhood has kept us going,â€™ added Phillips as he reflected on his long association with GB. â€˜Weâ€™ve had our ups and downs but weâ€™ve been promoted two levels now and thatâ€™s the foundations of what we are doing here.â€™

They are proving to be excellent foundations but GB just need to take the final step now, perhaps against Belarus in their next game.Â

U21 ROUND-UP: Title holders Spain get off to a winning start...

European Under-21 Championship title holders Spain get off to a winning...

Get ready for the MotoGPâ„¢ Ignition Hot Shots sale!

HOT OR NOT: Palace were in safe hands with Hodgson… how...

Moto2â„¢: who can hit back at Misano?