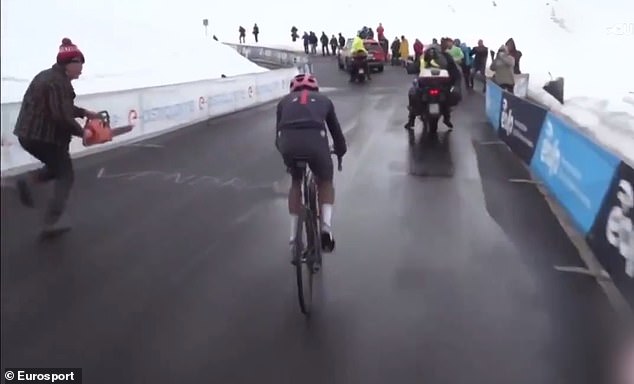 That’ll speed him up! Colombian cyclist Egan Bernal is chased up a climb by two spectators revving CHAINSAWS at the Giro d’Italia… and he still goes on to win the stage!

Colombian cyclist Egan Bernal is hurtling towards the Giro d’Italia title but he was given cause to speed up on Monday when he was chased up a hill by two spectators with chainsaws.

Going into Wednesday’s 17th stage, Bernal has built up a comprehensive lead with a 2min 24sec advantage over Damiano Caruso and 3min 40sec over Briton Hugh Carthy.

The 2019 Tour de France champion rode alone over the top of the snowy Giau Pass then carefully navigated the technical and wet descent into Cortina to add to his overall lead in stage 16 on Monday. 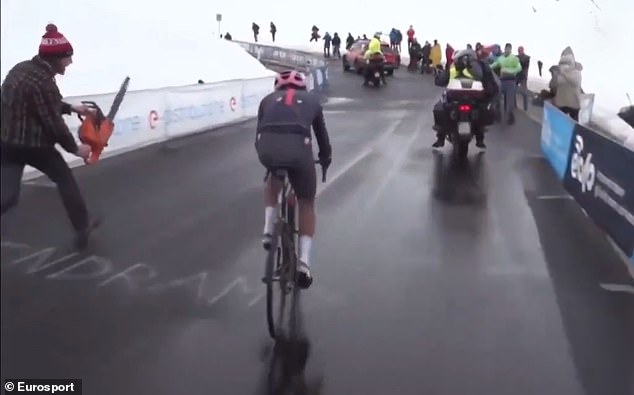 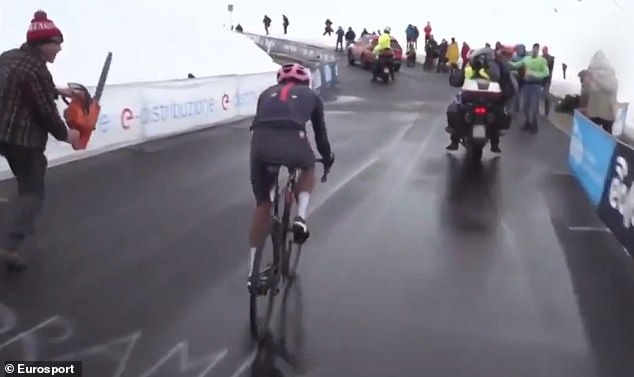 But winning stage 16 was not without struggle, especially when he had to speed away from two locals who decided to encourage him with a chainsaw.

But then, on the left side of the Colombian, two fans appear and they are revving a chainsaw each within a couple of feet of Bernal.

Bernal, who rides for Sir Dave Brailsford’s Ineos Grenadiers, somehow looks completely unfazed by the incident and continues to pedal past them before they drop out of shot.

‘I wanted to put on a show. This is the type of cycling I like, tough stages like these,’ Bernal said. 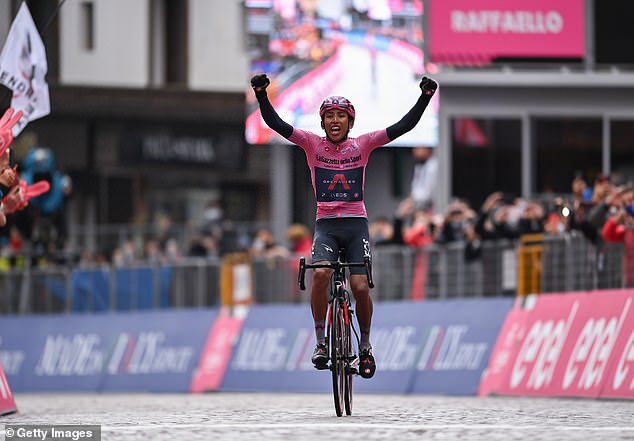 Going into stage 17, Bernal has built up a comprehensive lead with a 2min 24sec advantage

Snow and rain throughout the Dolomites prompted organisers to drastically shorten Monday’s stage from 132 miles to 95 miles, which took riders form Sacile to Cortina d´Ampezzo.

Bernal, who is competing in the Giro d’Italia for the first time, crossed in 4 hours, 22 minutes and finished 27 seconds ahead of Romain Bardet, who was quicker on the descent.

It comes after an Italian minister called for the route for Friday’s 19th stage to be changed to avoid the area in northern Italy where 14 people were killed in a cable car accident.

The cycling race is scheduled to pass through the Mottarone mountain, where the Stresa-Mottarone gondola plunged to the ground on Sunday near the shore of Lake Maggiore, but an alternative route is being discussed.

Racing continues on Wednesday when riders will go from Canazei to Sega Di Ala, a 119-mile trip.

Mark Selby clambered back to the snooker summit by sinking Shaun Murphy 18-15 to win his fourth world title at a raucous Crucible.Selby...

NBA star Iman Shumpert is the latest to join the Dancing...