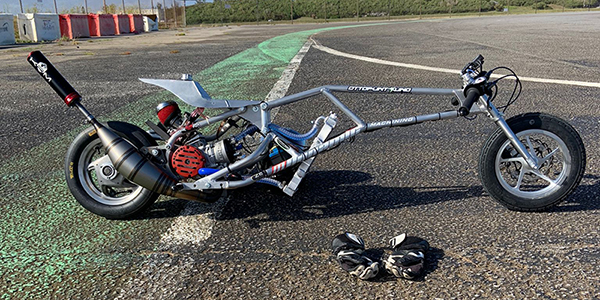 The Bermuda Motorcycle Racing Association held the second round of its Circuit Racing Championship and Drag Series at the RUBiS Southside Raceway yesterday [June 20].

A spokesperson said, “Sunday, June 20th boasted perfect conditions for a day of hi-speed racing at the RUBiS Southside Raceway. A full grid for the Scooter Mart KTM 125 class was made up of Aiden Lopes, Larson Burchall, Daente Fox, Sheun Simmons, Norre Robinson, and Jediah Cumbermack.

“Rookie racer Neveah Edwards rode alongside the Scooter Mart KTM 125 class on his Metrakit MiniGP 70 for the first time. Edwards is the first racer this season to bring back a Metrakit to the grid.

“The 2-stroke MiniGP race bike was a popular bike for racers in the past, however, they have been packed away for several years. There are a few currently being worked on that are expected to rejoin the series again at some point this summer, potentially making up their own class once again down Southside.

“Marcus Pimentel and Ed Cook were ready to race and represented the Scooter Open class.

“Fox took an early lead off the line in Race 1 and held off the train of KTMs for 5 laps as they jockeyed for position behind him. With a daring pass going into Casuarina Corner, Lopes jumped from P3 to P1, slowly lengthening a gap between him and the rest of the class.

“Coming onto the front straight Robinson slid out while trying to catch Lopes and was forced to retire to the pits. Cumbermack managed to charge his way up into second place and held it until the flag. Fox finished in P3, followed by Simmons, Burchall and Edwards respectively.

“At the drop of the flag, Cook rocketed off the line followed closely by Pimentel. Cook started to increase his lead with Pimentel in hot pursuit, until he ran wide coming onto the start-finish straight on lap 6 where he managed to get the bike back under control, avoiding a serious accident. Cook showed good sportsmanship and waited for Pimentel to catch up before taking P1 with Pimentel right behind him.

“It was a 5-way battle from off the line and into turn 1 with Cumbermack taking the inside line to lead. Lopes charged right behind, followed by Simmons, Burchall, and Fox who was pushed wide going into turn 1.

“Cumbermack continued to lead laps 2 and 3 with Lopes on his back wheel. Burchall slid out going into Casuarina Corner bringing his race to an end prematurely. This left a sizable gap between frontrunners Cumbermack and Lopes, and the rest of the group.

“Cumbermack made a mistake running wide out of a corner, opening the door for Lopes who quickly took the lead. Simmons maintained a hold on his position of P3, followed by Fox in P4. The battle at the front continued until Lopes made a mistake which gave Cumbermack the opportunity to take back the lead. Lopes sat back and waited for a chance to attack which came on the white flag lap, taking the lead once again on the corner before the start-finish straight.

“Lopes held the lead to the checkered flag followed closely by Cumbermack in second. Simmons slowed on the last lap allowing Fox to grab P3 just ahead of him. Edwards fought some mechanical issues during his warm-up laps and did not get to compete in Race 2.

“Cook rocketed off the line once again, however, Pimentel made some adjustments to his bike before the race and was much closer to Cook for Race 2. They had some good battles swapping the lead back and forth for the first half of the race.

“Unfortunately, Cook was forced to reduce speed to save his engine after suffering some mechanical issues. Pimentel’s bike was running strong bringing home the win with Cook managing to coast to finish the race in second.

“Fox made his way to the front of the pack again off the line for Race 3, followed closely by Cumbermack, Burchall, Simmons, Lopes, Robinson and Edwards, who was back on track and ready to go. Cumbermack quickly pushed his way to the front and proceeded to increase his gap on the rest of the pack, building up a comfortable lead over the rest and riding smoothly and calmly.

“Lopes had a poor start but eventually caught up to the back of the group and into third ahead of Simmons. Lopes managed to make up time and closed in on Fox on the white flag lap. Robinson got back up to speed and took 5th place back from Burchall. Cumbermack held his composure to grab the victory with Lopes in second, followed by Fox, Simmons, Robinson, Burchall and Edwards respectively.

“Cook rocketed off the start once again for Race 3. Whatever issue that Cook had in race 2, he fixed it because he was back on pace and on a charge forcing Pimentel to work to keep up. Cook continued to push forward taking an easy win with Pimentel not far behind in second place.

“The drag series saw a new entry from Kenneth DeSilva who unveiled his 100cc 2-stroke liquid cooled drag bike. It is a Custom Mechanics build in an aluminum drag frame with CVT transmission and 10’ drag slicks. It was the only bike in its category but this did not stop the riders from going head to head along the 150m strip.

“DeSilva and Marcus Pimentel, on Ed Cook’s 215cc Yamaha Cygnus, lined up for the first two races, where DeSilva won by 4-6 bike lengths. The lower class bike, ridden by Pimentel, managed to stay alongside DeSilva until around the halfway mark where the power of the Custom Mechanics drag scooter kicked in and blew past the line, reaching a top speed of around 140 kph.

“The third race was forfeited by DeSilva’s opponent due to mechanical issues, giving him the overall win in the first heat.

“The Yamaha Mio 240cc owned by Michael Soares, rider Cook, barely pulled an overall victory over the 215cc Yamaha Cygnus owned by Rick Vesley and ridden by Marcus Pimentel. It came down to their last race after each bike had secured one win each in the previous two races. In the final race, the Yamaha Mio won by half a wheel length.”

Mr. Cook, president of the Bermuda Drag Racing Association, said, “I am very happy to see another new participant who has brought an A class drag bike to the track that did pretty good for his first event! There are more bikes being built for drag racing so we will have more on the next race event in two weeks.” He continued, “It’s been a dream of mine to have legal drag racing and having that dream come true is one of the greatest feelings ever.

“If you know me, you’ll be proud of these achievements; it shows to keep pushing for what you want and it will happen. The main thing to remember is you can’t do it on your own and without your team/friends/family.”

The spokesperson said, “The Bermuda Drag Racing Association is encouraging more bike enthusiasts to bring their need for speed to the track where they can build fast bikes and race them on a safe and secure drag strip. The organisers believe that with Bermuda’s deep bike culture, there is the potential to grow the drag series to that seen in countries like Taiwan, Thailand and Philippines.

“The BMRA’s next races will be held on Sunday, July 4th at the RUBiS Southside Raceway. Anyone interested in joining the BMRA’s Circuit Racing Championship or Drag Series should register their membership at bmra.bm.”

Conor McGregor enjoys a cocktail in the sun on holiday after...

Conor McGregor put his feet up as he relaxed on a sun lounger while on holiday in LA on Thursday, a week after...