Morata missed good chances either side of half time against Sweden and with unforgiving home supporters jeering him he was taken off with 25 minutes left.

The former Chelsea striker carried the can for Spain’s failure to finish moves and make the most of their domination of possession but it was Olsen’s night with a string of superb saves including an injury time block to deny substitute Gerard Moreno. 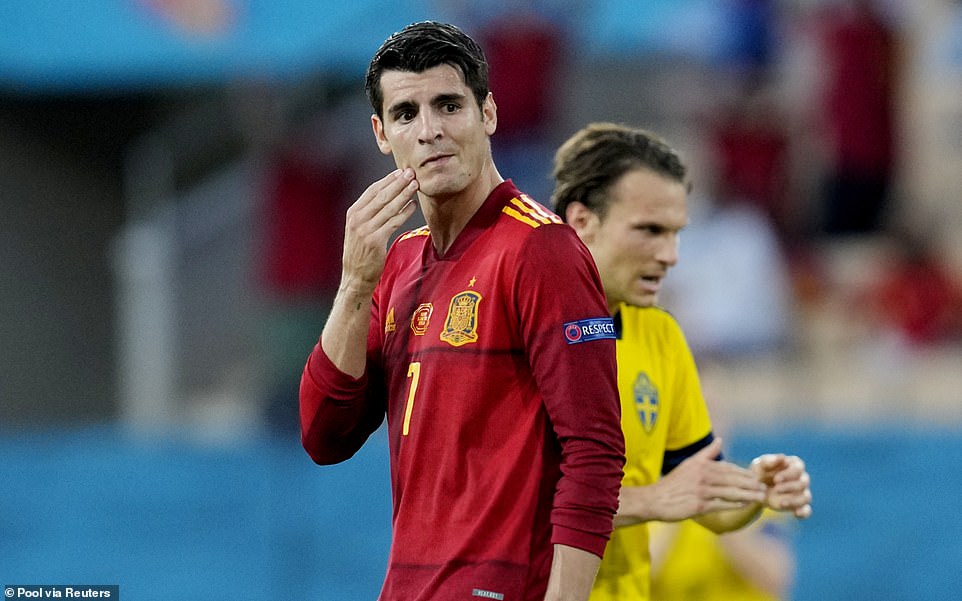 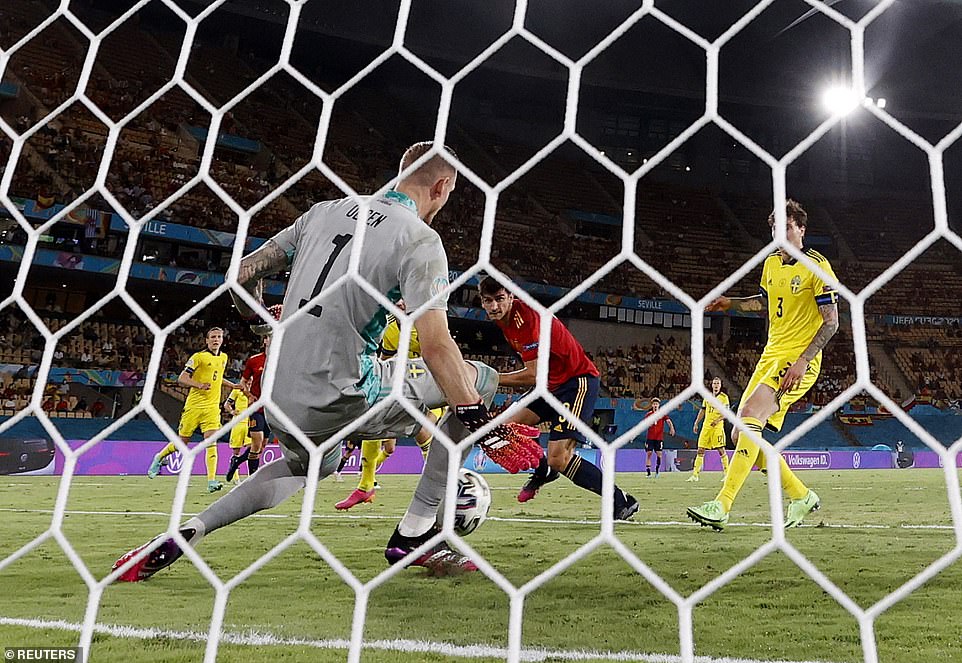 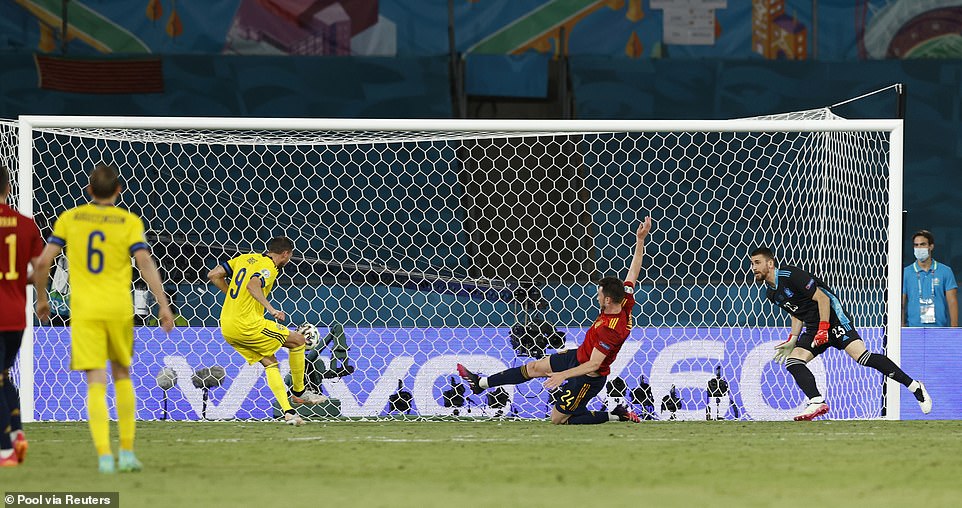 Olsen was brought in last season by Carlo Ancelotti to put pressure on Jordan Pickford but with the Italian coaching leaving he is likely to return to Roma.

As shop windows go this will have done his summer prospects no end of good. Morata’s crime was to not even force Olsen into a save with two clear-cut opportunities.

Of the whistles for his team-mate, Manchester City defender Aymeric Laporte said: ‘It’s hard to understand and it’s not the first time it has happened.

‘You can’t doubt someone of his quality. He can score three in the next game and that will shut people up.’ 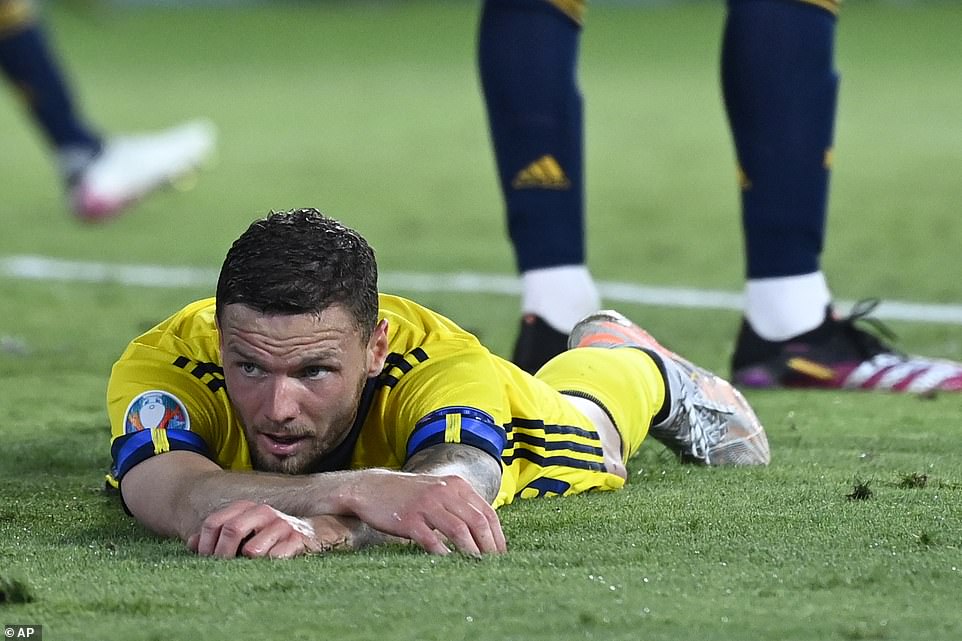 Berg was left in disbelief after firing wide of the far post, and was teed up following superb work from partner Alexander Isak 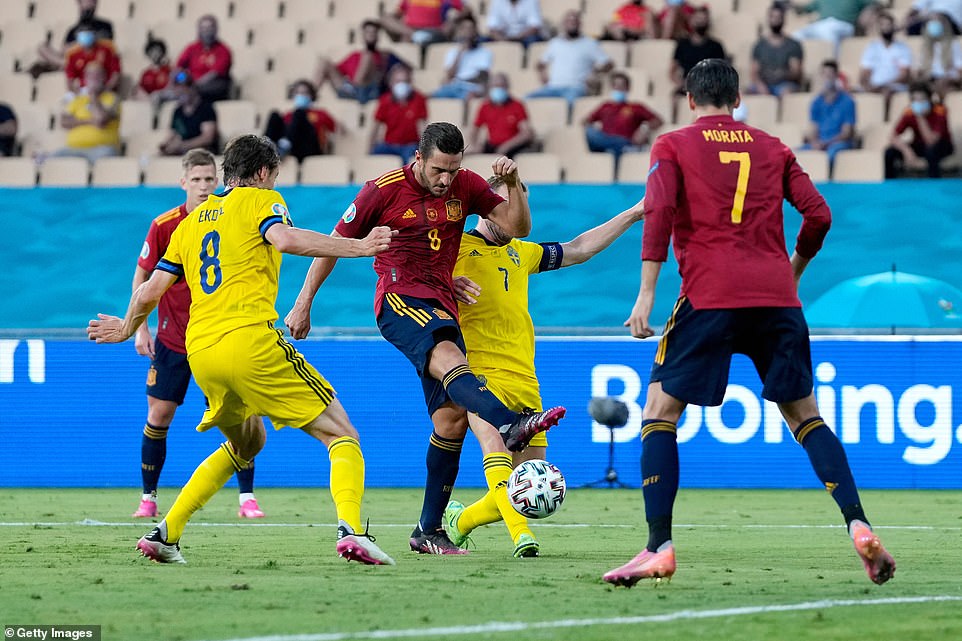 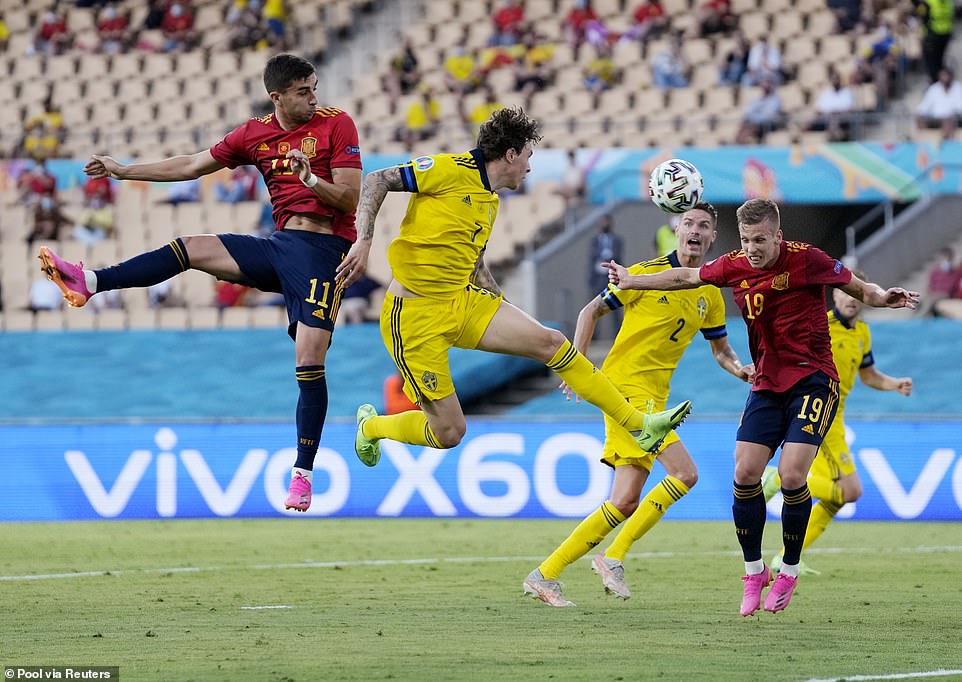 Spain coach Luis Enrique preferred to blame the playing surface. He said: ‘Morata does so many things well. He was unlucky in front of goal but he has the personality to recover.

‘The pitch did not help. The players complained about it. It’s not an excuse. We created chances but we couldn’t take them.

The Spain coach had picked a young side with Pedri becoming the youngest player to represent them at a major tournament aged 18 years and 201 days.

He was shadowed by Kristoffen Olsson, who chopped him down at the first opportunity and was lucky to escape with just a warning from Slovenian referee Slavko Vincic. 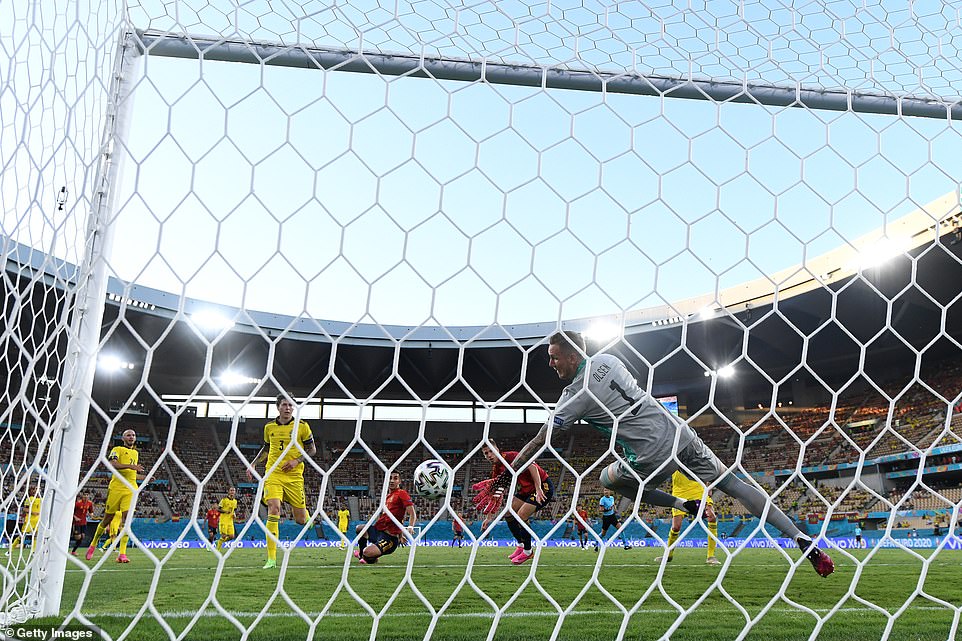 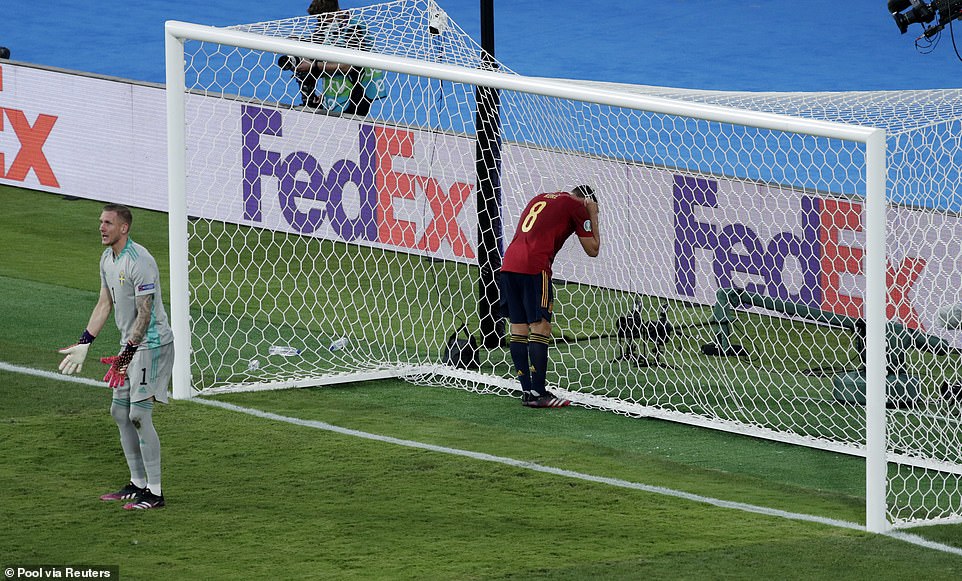 Koke was left in disbelief after missing a chance of his own, and Spain were ultimately left to take just a point from the clash 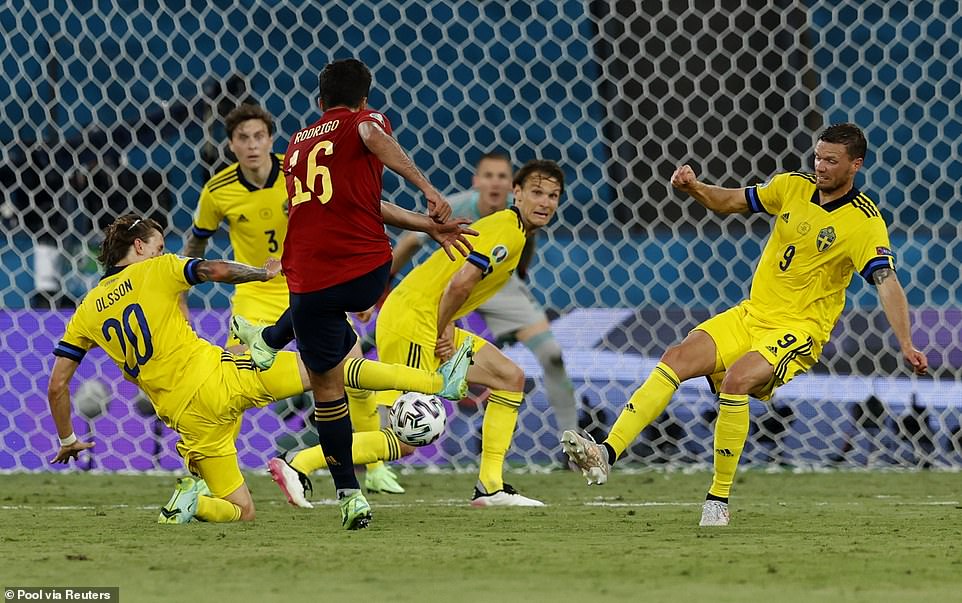 In 29-degree heat and on a dry bumpy pitch Spain dominated possession and Sweden waited for the chance to counter. There were 11 minutes on the clock before their centre-forward Alexander Isak touched the ball.

Just after the quarter-hour Dani Olmo could have put Spain ahead but when Koke swept the ball in from the right the Leipzig winger got his head to it only for Olsen to make his first important stop.

Koke was next to go close with a shot wide of Olsen’s goal after Sweden failed to clear a loose ball in their area.

Spain were now getting in behind Sweden and over-lapping full-back Marcos Llorente’s cross had to be cleared for another corner by Marcus Danielsson.

Sweden’s pass count was still lower than the temperature but Koke missed another chance for Spain ballooning an Olmo cross over the bar. 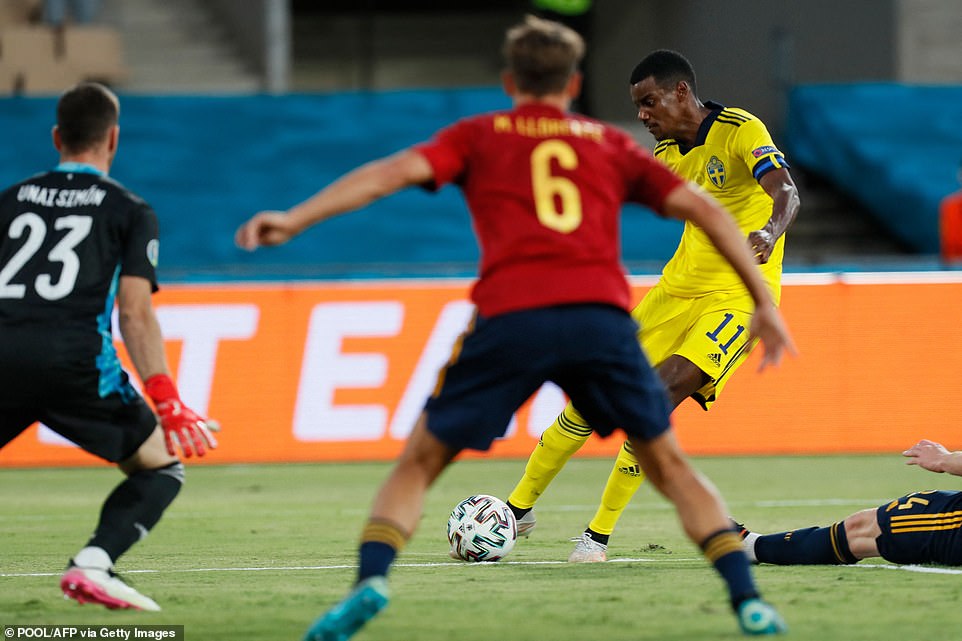 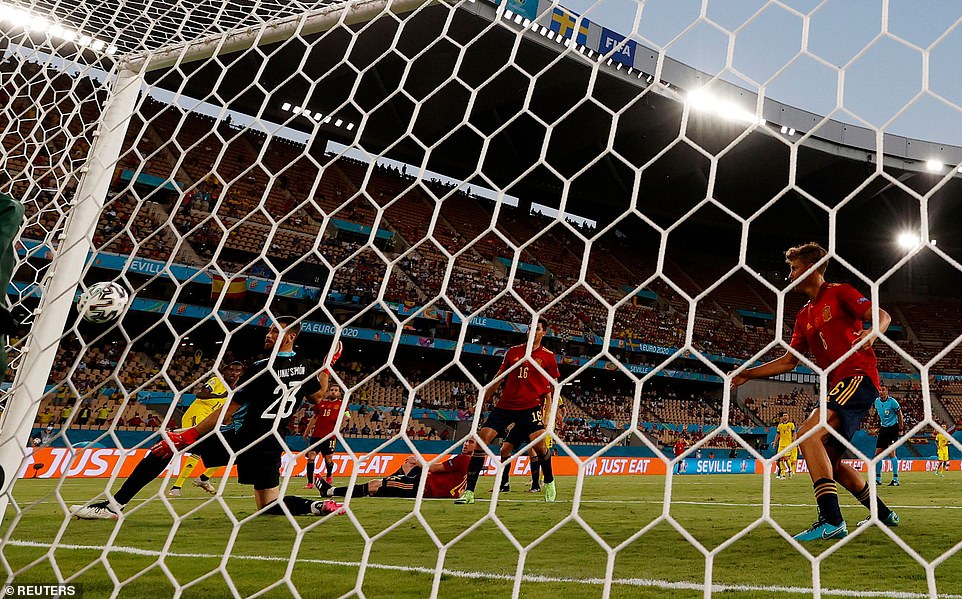 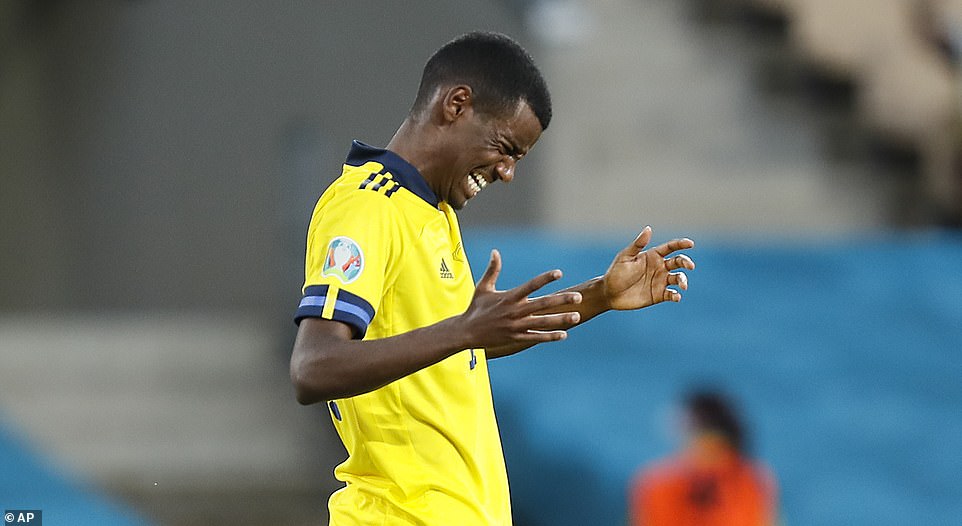 Isak turned away after watching the ball come inches away from crossing the line, and was later removed in a Sweden rethink

Sweden won their first corner 10 minutes before the break when Unai Simon tipped over Sebastian Larsson’s cross. But it came to nothing and with Spain’s next attack Morata missed the best chance of the half.

Their were some timid whistles after he was gifted the opportunity by Danielsson’s missed kick but bent his shot wide of Olsen’s goal.

The punishment for the miss was almost instant. Isak ran at Spain’s defence and with Unai Simon slow off his line it was left to Llorente to block the shot onto the post.

Sweden had the first chance of the second half but Lustig missed his kick. At the other end Morata sent another shot wide and this time the whistles were loud enough to bring a reaction from Luis Enrique who turned angrily to those jeering the Spain centre-forward. Morata’s confidence was now shot and his next pass went straight out for a goal kick.

Sweden were buoyed by Spain’s slow start to the second period and Marcus Berg should have converted Isak’s cross at the back post after he wriggled clear of three Spain defenders. 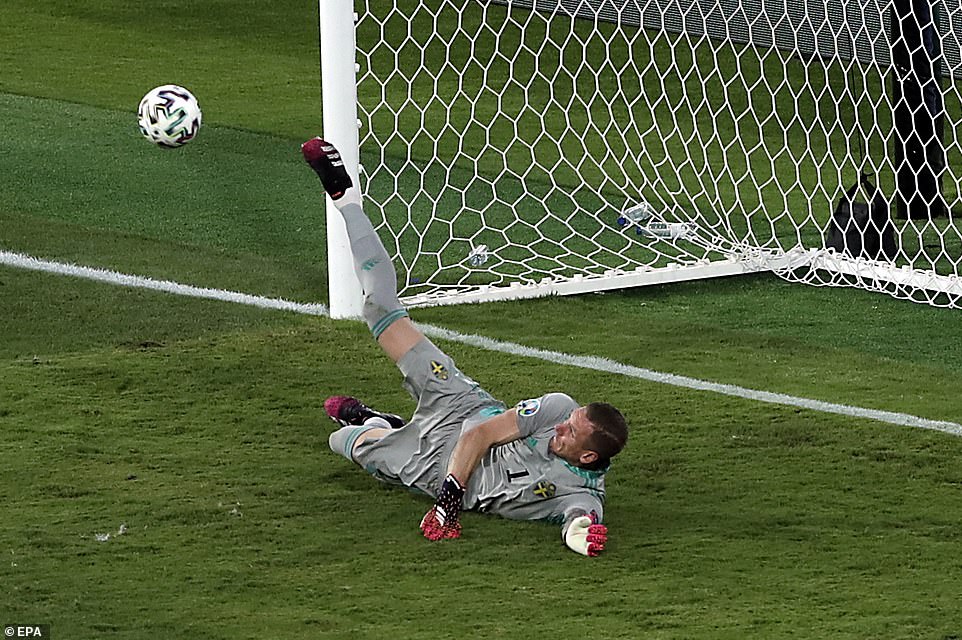 Olsen was forced to make another save in the second half, but a weak left-handed save saw the ball skew horribly into the air 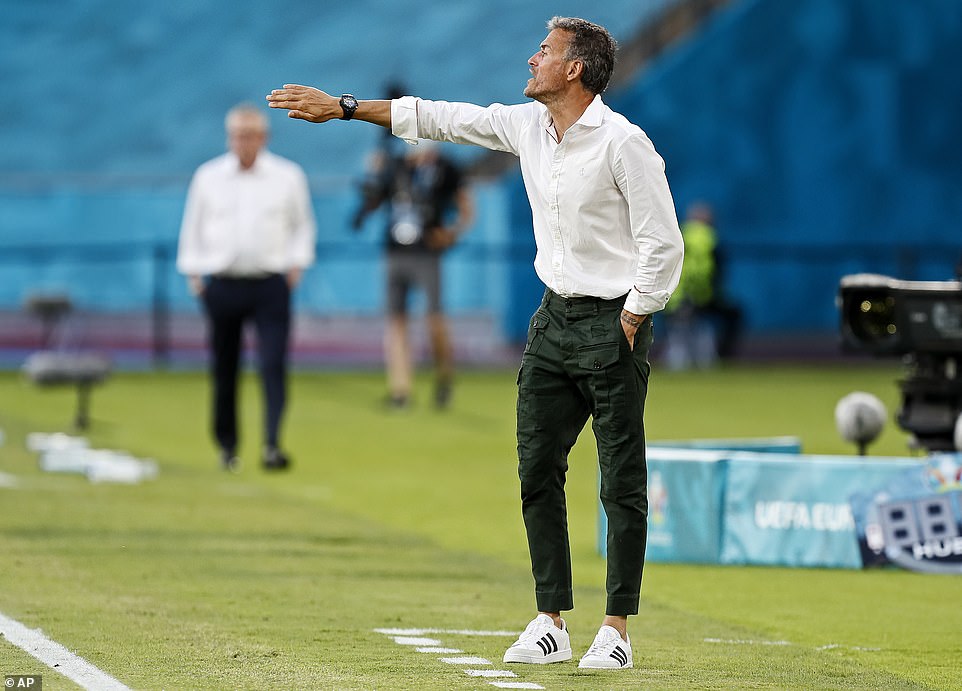 Spain had lost their zip and on 65 minutes Luis Enrique had seen enough.

Morata was off, his last touch had been to allow the ball to run over the byline. He was replaced by Pablo Sarabia with Ferran Torres moving to centre-forward. Thiago Alcantara replaced Rodri.

Gerard Moreno was the next change and with Morata off, the whistles from Spain supporters were now for Sweden’s time wasting.

In-form Moreno, fresh from scoring in Villarreal’s Europa League triumph over Manchester United had his chance on 90 minutes but Olsen was there again to block his header from Sarabia’s cross.

Spain must pick themselves up before Saturday’s meeting with Poland. ‘It’s not going to be easy,’ said Luis Enrique, ‘they are not going to want to come out and attack either.’ 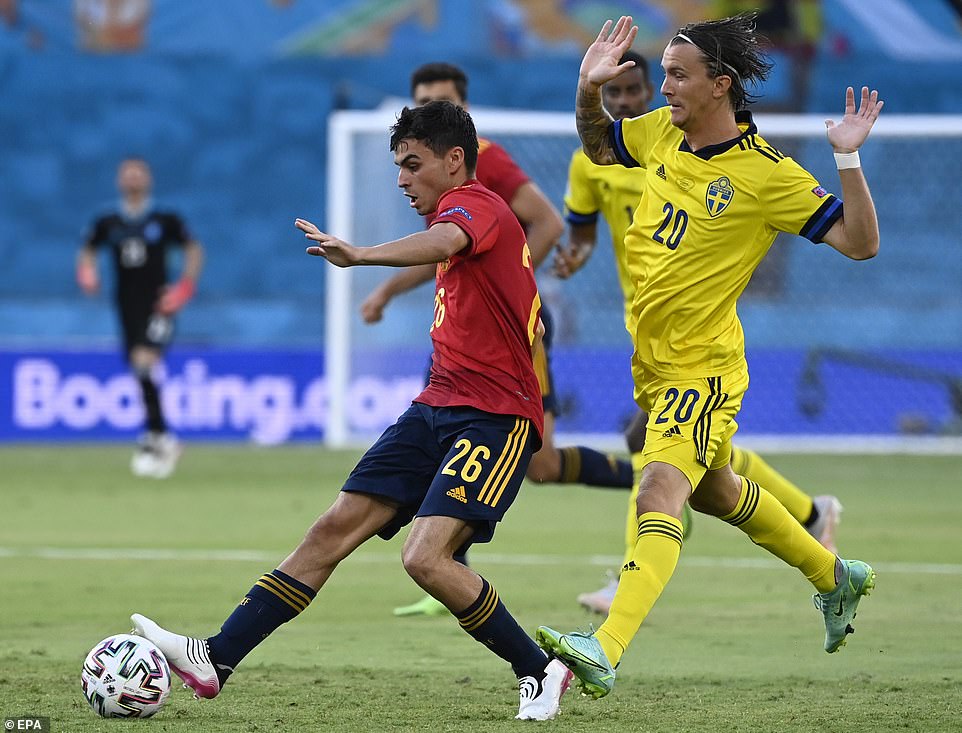 Sweden improved after the break and almost threatened Spain’s goal following the restart, only for Mikael Lustig to mis-kick

CHRIS SUTTON’S GUIDE TO THE GROUPS: From France to North Macedonia,...

The preparations are done, the wallcharts have been pinned up and the office sweepstakes have been drawn. In just a few hours Euro...

Premier League predictions: How will YOUR team fare this season?

Euro 2020: Spain striker Alvaro Morata hits back at criticism after...

NBA star Ben Simmons splashes out $23 million on a mansion...