By Pete Jenson In Spain For Mailonline

Robert Lewandowski bullied Spain out of two points in Seville leaving Luis Enrique’s team still winless at the Euros and needing a victory in their last group match to be sure of progressing.

It was all smiles for Spain in the first half when Alvaro Morata scored his 20th international goal and celebrated with the coach who had defended him after he was whistled off by home supporters in Spain’s first game.

The goal had been set up by Gerard Moreno who Luis Enrique had picked to start alongside Morata and it was no surprise when the scorer ran straight to his coach to embrace him. 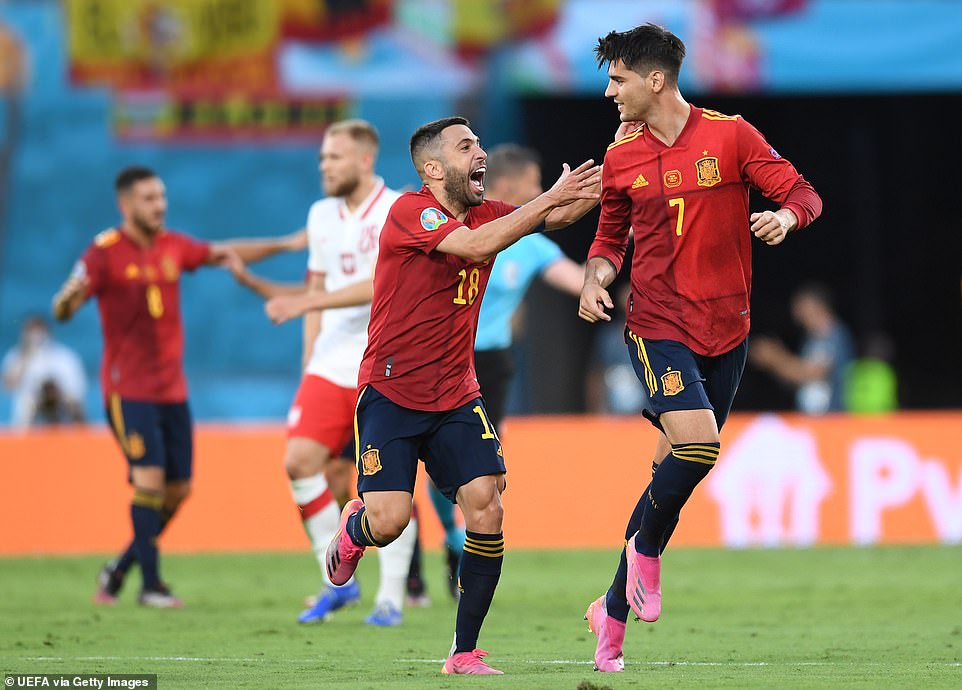 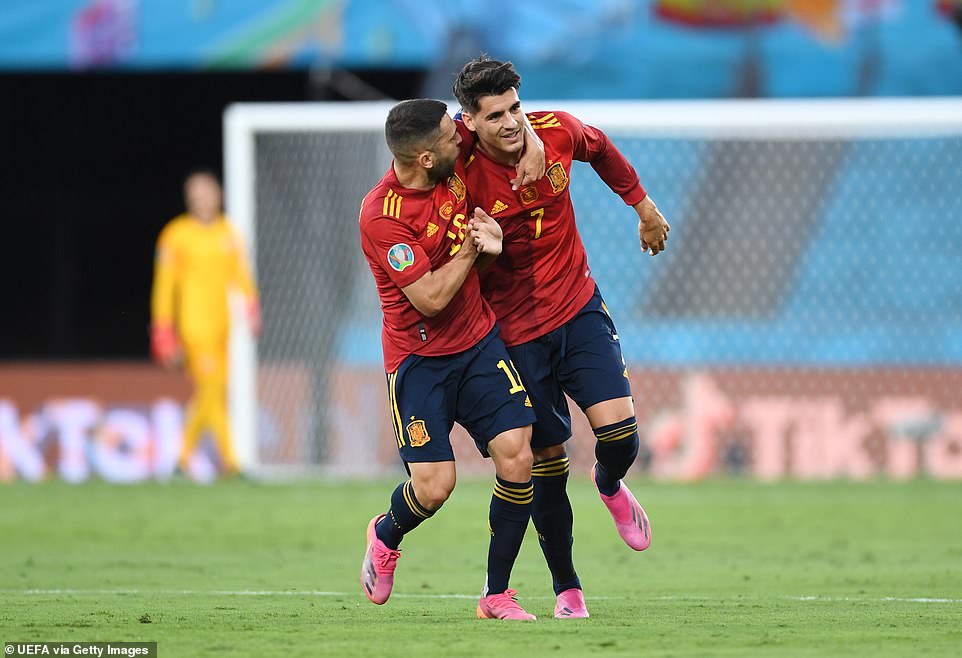 But in the second period Lewandowski’s experience showed when he outthought and out-jumped Aymeric Laporte to nod in the equaliser from Kamil Jozwiak’s cross.

Moreno and Morata needed to deliver again but the former missed a penalty and the latter scuffed the rebound wide. Morata had the best of the late chances but was denied by Wojciech Szczesny from close range.

The former Chelsea forward admitted: ‘Our last game against Slovakia is a final now. We let this game get away from us. My goal counts for little because we haven’t won.’ He had been better than in Spain’s first game and Moreno had been bright too but there was one world-class centre-forward on the pitch and he was in a Poland shirt.

Lewandowski was isolated for most of the game feeding off scraps at the top of a team who spent most of the match trying to win the ball back, but from very little he earned Poland’s point.

Morata very nearly made the worst possible start to the game with a clumsy challenge after three minutes in his own area on Piotr Zielinkski that Italian referee Daniele Orsato could easily have given a penalty for.

Spain improved after a nervous start and Dani Olmo tested Szczesny. Morata then had a shot on the turn blocked for a corner. From the kick Moreno was pushed in the area but again the penalty shouts were waved away. Poland were now reduced to playing on the break and it was Jordi Alba’s pace that enabled him to get back and snuff out the increasingly dangerous Lewandowski. 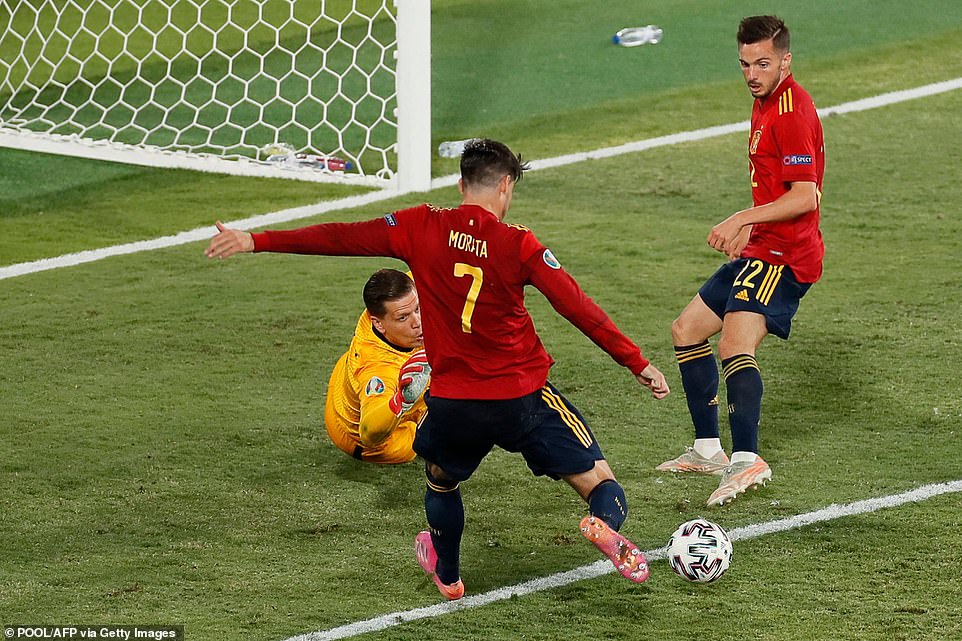 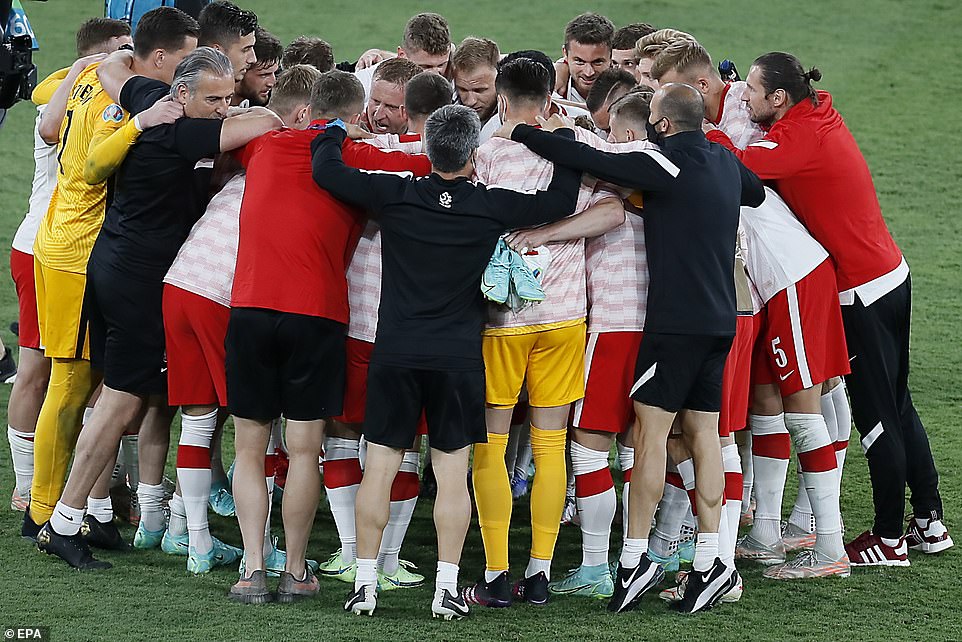 On 24 minutes the goal came. Moreno drifted in from the right and slid the ball through a crowd of Polish defenders where Morata dodged in front of Bartosz Bereszynski to turn the ball past Szczesny.

The flag was raised but VAR confirmed that Morata had been clever, staying the right side of Bereszynksi’s outstretched left leg.

It always looked like Spain would need the second because Poland were still threatening on the break. From nothing Lewandowski created a chance crossing for Karol Swiderski to steer the ball over from close range.

Had the Bayern Munich forward been on the end of the assist instead of its supplier things might have been worse for Spain. And three minutes before the break they lived dangerously again.

Alba failed to control Rodri’s pass and the ball ran to Swiderski who hit the post from outside the area. The rebound ran to Lewandowski but Unai Simon made the save of the half to deny him.

Just eight minutes into the second period the equaliser came, and from the expected source.

Lewandowski outjumped Laporte to head past Simon. The lead should have lasted little more than three minutes but Moreno missed a penalty.

Moder trod on the forward’s foot and was booked but when Moreno stepped up he hit the post and Morata scuffed the rebound wide with the goal gaping. The dynamic duo of the first half had combined to fluff the gift of a quick response to Lewandowski’s strike.

They combined again on 64 minutes but Szczesny pushed away Morata’s shot from Moreno’s pass. Morata was denied again by Szczesny before being replaced four minutes from time.

‘We were better than them but not enough to win the game,’ said Luis Enrique. ‘The penalty came at a crucial time but we couldn’t profit from it. Nobody said it was going to be easy. We have to win our last match.’

Sportsmail's resident scout is a top football expert who attends matches every week searching for the next star of the game.But with the...

Hamilton jokes warring Mercedes and Red Bull bosses should ‘get in...